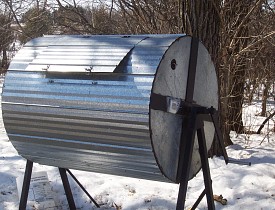 What, if any, contaminants could be lurking in home compost piles? Conscious gardeners tend to want to know exactly what is in their fertilizer. That's why I interviewed three professors to find out whether pesticides, chemicals, or dangerous microorganisms can contaminate home gardens via compost.

Why do contaminants matter? "If the feedstock contains a lot of materials that are detrimental to the composting process, the process and the compost will suffer," warns Dr. Nicholas Smith-Sebasto. Executive Director of the Center for Sustainability Studies at Kean University, he operates a state-of-the-art, custom-designed, aerobic in-vessel digester that processes 1000 pounds of food scraps generated on campus per day. In other words, contaminants in compost can actually slow down or inhibit the process of composting.

What Contaminants Could Be in Home Compost Piles

"Contaminants in composting efforts are typically defined as those materials that either will not break down biologically, such as plastics, or that cause a decrease or elimination of the microbial activity, such as chemical compounds like pesticides," clarifies Dr. Smith-Sebasto.

"For home composting, contaminants might also be considered those materials that will cause odors or attract scavengers. Typically, this means meats and dairy products. One more potential contaminant is pesticides or herbicides. If the homeowner used either of these chemical compounds on her/his property and then uses either the grass clippings or other plant matter in her/his compost producer, research has shown that some of the chemical compounds are persistent and may remain in the compost. If the compost is then used around plants that are susceptible to either the pesticide or the herbicide, the growth of those plants may be suppressed."

Dr. Linda Chalker-Scott, Associate Professor and Extension Urban Horticulturist at Washington State University, notes, "Besides the obvious culprits — herbicides, insecticides, and other toxic substances — there are other possible contaminants. These could include weed seeds, feces, and harmful bacteria and fungi from diseased plants. While these natural contaminants can be neutralized during composting, the active ingredients in pesticides may not be."

"Sometimes people forget that the glossy ads in a newspaper have heavy metals which should stay out," adds Dr. John M. Gerber, Professor of Sustainable Food and Farming at the University of Massachusetts-Amherst.

How to Keep Home Compost Piles Free of Contaminants

The consensus among the professors: Know what you're composting. Dr. Chalker-Scott cautions, "Just keep in mind that anything you apply in your garden might end up in the compost pile. Use fertilizers sparingly and pesticides only if absolutely necessary."

Dr. Gerber points out, "I don't accept grass clippings, for example, if I don't know the source. Too many homeowners use pesticides on their lawns and I surely don't want their leaves in my compost."

As for "natural" contaminants, "the weed seeds, diseased plant parts, etc. will be neutralized if the compost is cured properly at the right temperatures and for the right length of time," explains Dr. Chalker-Scott. "You don't want it TOO sanitary, because your microbes need lots of water and oxygen to do a good job of degradation. In other words, you don't want your compost pile closed off from the rest of the world."

The Best, Most Sanitary Container for a Home Compost Pile

Dr. Chalker-Scott likes "the rotating bin designs. These allow for water and oxygen to permeate but are off the ground. Not only does this keep animals out, it also keeps the compost from leaching into streams or other bodies of water, where it causes nutrient pollution. If there's a way to collect the water that leaches through the compost, it can be used as a weak fertilizer in your garden or for your houseplants."

Regarding rotating drum composters for home use, "Conceptually, they appear to be consistent with the design features of larger, industrial scale digesters," opines Dr. Smith-Sebasto.

If you can't afford a rotating drum compost bin, fret not. Dr. Gerber assures, "The best is the cheapest one that allows you to contain the compost in at least a 4'x4'x4' pile for heat retention. Nothing special is needed although some people purchase barrels and drums that can be turned easily. They are nice but unnecessary."

"Humans are facing several serious environmental issues that have not received the attention that I think they deserve," discloses Dr. Smith-Sebasto.

"1) The human population continues to grow. It will probably reach about 9 billion in the next few decades.

"2) The amount of land available to grow food to feed people is decreasing because of sprawl.

"3) The fertility of the land that remains for farming is decreasing largely because of the use of synthetic, petro-chemical based fertilizers.

"4) Phosphorus, a major component of synthetic fertilizer, is nearing exhaustion; that is, there will be no more to mine, just like we will soon run out of oil.

"So the only way to restore the vitality of our soils is to add compost to them. But there's another benefit of composting. According to the United States Environmental Protection Agency, for every one ton of food scraps that is composted, there is a resultant one metric ton avoidance in greenhouse gas emissions. If Americans were to compost all of the food scraps generated in the nation in just one year, the reduction in greenhouse gas emissions would be roughly the same as removing over 6 million cars from the road!"