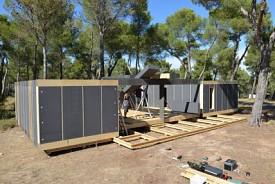 As the passive house trend spreads globally, with people building homes inspired by the standard as well as those that meet its exacting qualifications, architecture firms are getting seriously creative when it comes to building environmentally-friendly homes. The latest iteration of the passive house may just be my favorite yet, because it combines some of the best features of the standard with ease of construction and affordability.

Often, environmental trends are costly to implement, placing them beyond the reach of ordinary people who want to do the right thing by the planet. It's one of the potential pitfalls in building green, and an important consideration for people who making plans to build or retrofit their own homes. This passive house, however, isn't hindered by some of the cost factors that sometimes make passive houses hard to build, because it's designed to come together from very basic components, with a minimum of labor (one of the highest costs of construction).

That's because the Pop-Up House, developed by French design firm MultiPod Studio, is, well, a pop-up house. It's assembled much like flat pack furniture from an assortment of polystyrene blocks and some laminated veneer lumber, and it's designed to be put together with a screw driver. Well, we'd recommend a screw gun, and so would they, unless you really enjoy the thought of getting huge hand blisters during construction.

It's still in prototype mode, sadly, but it looks very promising, with a simple, basic construction that could potentially be quite configurable -- and would allow substantial room for a large family. The Pop-Up House would, of course, need interior finishing such as wiring by Boston electricians after the basic construction mode was over, but creating a shell is a good first step, especially if it met the standards used for passive homes, which would require some additional engineering. It needs to be tightly sealed to minimize heat exchange, which isn't possible with the current design.

The prototype also has another flaw -- green advocates aren't convinced about the use of polystyrene and other insulating foams, since they may offgas potentially harmful chemicals. While it would be possible to develop Pop-Up Houses with other insulating materials like cork and recycled fibers, this would require more design work and refinements on the original concept. Fortunately, the designers are very open to considering designs with alternatives, indicating that they're putting a great deal of thought into the development and applications of the concept.

While the Pop-Up House still needs more funding and work to go into full development, it's a fascinating demonstration piece, and it would be exciting to see it go to market as a fully functional structure. Of course, it may be a while before we see it in the United States, thanks to our exacting and demanding building code, which often doesn't accommodate green architecture, thanks to the fact that green building involves so many innovative techniques and materials.

Meanwhile, green roofers and other building professionals can start to think about how they might work with the bones of a Pop-Up House to create a beautiful green residence for clients who are interested in cutting down on their environmental footprints while also enjoying beautiful architecture.