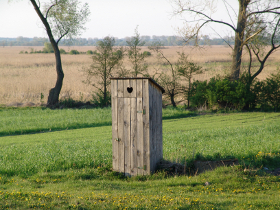 For years, toilets worked just fine getting rid of our waste, but until relatively recently, they used a lot of water doing so. Federal law required that by 1994 all toilets use no more than 1.6 gallons per flush (GPF). The original low flush toilets didn’t do a very good job and got a bad reputation that endures, often unfairly, today.  After some tinkering with the designs, plumbing manufacturers came up with low flush toilets that work very well. The Environmental Protection Agency now defines High Efficiency Toilets (HETs) as using 20% less water than the industry standard 1.6 GPF, or 1.28 GPF maximum.  A toilet can meet this requirement with a single 1.28 or less GPF, or dual flush that averages one solid (poop) and two liquid (pee) flushes at 1.28 GPF or less.

Now, you are probably thinking, "This guy is crazy, we all know that those efficient toilets don’t work, they never did and they never will. Go back to Austin or Portlandlia or whatever ecological rock you crawled out from under, ya hippie!"  Well, I am here to tell you that they do work.  They flush lots of stuff – I’ve seen demonstrations with potatoes, rubber balls, sponges, and (privately) with real poop.  The only noticeable different from the old, inefficient toilets, is that you get occasional skid marks in the bowl, necessitating a little extra cleaning.  You’re probably thinking, “Eww, gross.”  Well, get over it.  You can save thousands of gallons of water a year with a more efficient toilet, so you can use a bowl brush occasionally.

In 2003, the US and Canada together developed standards to test toilets to make sure that they actually used the amount of water they said they did, and to make sure that they actually flush away the stuff you want to get rid of.  The developed something called the Maximum Performance Test (MaP), and you can find a list of every tested toilet, including how much water it uses and how much solid waste it can flush away. Now, if I haven’t grossed you out enough yet, you have to read the rest of this story.  The lab needed something that acted a lot like poop to test the toilets, and after searching they settled on soybean paste.  Apparently when they tried to place a big order for it the vendor asked them what they were using it for, and when they told them, they refused to sell if for that purpose.  After some negotiations, they were able to buy it on the condition that the supplier remained anonymous.  But I digress…they use this fake poop to see how much each toilet can flush.  They keep loading up the toilet until it can’t flush anymore and then they measure how much it got rid of.

To be labeled WaterSense, a toilet needs to flush at least 350 grams of the stuff, more than most people will produce.  I just checked on the MaP website and there are 129 toilets that can flush over 1000 grams of soybean paste! Try to tell me now that those low flush toilets don’t work!  Check with your local water company; they probably offer rebates that cover a lot of the cost of replacing your toilets. So get on the stick, find a good, efficient toilet, and change out your old dinosaurs post haste.

Green building consultant Carl Seville writes for Networx. Get home & garden ideas like this on Networx.com.