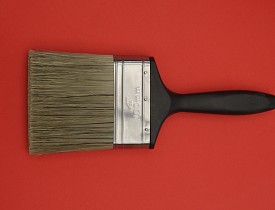 The newest thing in no VOC (volatile organic compound) paints is an additive material known as “Microban®." “Microban® is the only non-chemical, non-metallic, anti-mildew and anti-bacterial protector out there [in the realm of no VOC paints],” said Paul MacMunn, manager of Couture Bros.

MacMunn said that while there are many good paint brands on the market, his business promotes California Paints Elements products, partly due to the new Microban® feature and partly due to proximity. “The company is less than 80 miles from here [Turners Falls, MA]. Environmentally, this [buying inventory from local companies] creates the lowest carbon footprint,” said MacMunn. “Distance has become important to many people,” he added. California Paints have been noted as being the first to use Microban® technology.

MacMunn explained that Microban contains very sharp, sub-microscopic pin points called “nano-spears.” “Mildew, mold and bacteria are single-celled organisms. When they land on the surface [of the paint], the spears essentially stab them and they bleed out,” said MacMunn. “They [the mold, mildew and bacteria] can’t heal themselves. So, not only do you have microbial protection, but the paint itself is also not releasing any toxins,” he said.

MacMunn said that the Elements products, which include primers, indoor finish paints, ceiling whites, ceramic kitchen and tub enamels, and even a wallpaper primer, are great for use in kitchens, bathrooms and nurseries. MacMunn added that Elements products are also good paints for rooms of those who may be home-bound. Microban does not work on viruses.

MacMunn said that the paint industry has gone above and beyond to comply, and at times supersede, federal regulations regarding volatile organic compounds. “Many paint manufacturers have made huge strides with the ever-increasing VOC restrictions,” said MacMunn. “They have even managed to create water-based paints that equal solvent-based products in performance,” he added.

Why use low or no VOC paints?

Paint is comprised of color (pigment), a binder (the material that makes the paint stick to the wall) and a solvent, which keeps the paint liquid until it comes in contact with air. Volatile organic compounds are generally contained in the solvent portion of paint.

The fumes that are emitted by volatile organic compounds can cause eye and skin irritation, can trigger asthma attacks and headaches and have been linked (when there has been long-term exposure) to cancers and damage to the liver and kidneys. Also note that just because paint has low/no VOCs, it does not mean that it doesn’t have a smell.

“There is very little difference these days between paints. If it is a premium product, whether ‘Brand B’ or ‘Brand G,’ you are going to get a good result,” said MacMunn.  He said that where the consumer tends to get into trouble is when he believes claims about paint products that may be over-stated. “For example, a lot of big box stores will promote products they claim is a ‘one-coat hide.’ There is no such thing,” said MacMunn. “Sometimes they (‘one-coat’ paints) work if the situation is just right. But if they tell you their paint goes on smoother, or you’ll see less brush or roller strokes, it just isn’t so,” he said.

Cris Carl is Networx writer.  Read more articles like this one or get help with your home projects on Networx.com.

Interior Painting And Repairs Restore The Home I Bought At Auction

Top Cities Covered by our Painters