Home, Home on the Shooting Range 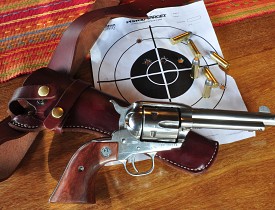 It has been almost 2 years since I bought my first firearm. I learned to shoot as a teen using some of the guns my father owned. He was a police officer and competed on the police's pistol team. As young children, my brothers and I were taught the fundamentals of safe gun handling and shooting. We would visit some of the local outdoor ranges (family and friends' private property) and even did some small caliber shooting in the basement of the family home.  It was a hoot and I enjoyed it, but between growing up and engaging in other sporting pursuits (rock climbing, backpacking, skiing, cycling) the shooting took a back seat...until now.

Having recently read The Journals of Lewis and Clark, I began to wonder about how those earlier firearms felt when shot. I'm sure part of this comes the latent "mountain man" in me as well. My first gun was not a replica of those Kentucky flintlocks used by the Corp of Discovery, but a somewhat more modern and shorter version. I started with a replica 1851 Colt .44 cal black powder revolver. (This is a "cap and ball" muzzleloader that was used in the early stages of the Civil War.) My first time out shooting was on some nearby forest service land, and is now my local choice for practice here at home. Living in the wide open "wild west" we have a good share of public lands that are open to recreational shooting. My primary home is located within the city limits of my small town, and shooting here is against local ordinances. Where my off-the-grid cabin is located, however, these rules do not exist.

The home made range at the cabin

Our property in northern New Mexico is a bit under 42 acres and the land surrounding us is pretty much the same as it was when native hunters used flint-tipped arrows. In fact I found a decent arrow head located about 30 feet from our cabin site. One of the geological features of our land is a small gorge that has a seasonal stream through it in the early spring. I decided that this "valley" could easily contain a small shooting range.

Common sense and local laws require that projectiles stay within the boundaries of your property. Our small canyon provides this with ease. Other common regulations regarding shooting on private property may also involve local noise ordinances. Our choice of location also covers this base pretty well. Being down in the valley for the shooting the noise level up on the surrounding terrain is already significantly reduced. Add in the fact that the nearest neighbor is about a mile away and that all of the other neighbors within a three-mile radius can be counted on one hand...noise for us is not much of a problem.

In addition to my first black powder muzzle-loading pistol I now have a few more guns, and will most likely continue to collect them as my father has for the last 60 years or so. Most of my firearms are pistols and with that in mind, most of my shooting is done at a relatively short distance. Thirty to fifty feet is about the limit for my Single Action Army revolvers paired with my 50-year-old eyes.

The location I chose for my range is a section of the valley that has a 20 to 30-foot high backdrop. I cleared some minor vegetation between the "firing line" and the "target zone" and that was pretty much it. Those that set up their own ranges, where my natural topography is not present, will often construct "back drops" using mounds of dirt or dirt retaining walls using large timbers, old tires, etc.  The concept is simple...you merely need to provide a barrier that is big and robust enough to stop speeding bullets.

For the occasional rifle work, we set up a different location in which we fire "down into" the gully from the ridge located in front of our cabin. Here the distance meets our needs for small caliber rifles and the open sights on my Winchester 1873 lever action.

It runs in the family

Just as my father taught me to shoot, I have begun the process with my two daughters (it's a little challenging, but worth the patience). Each new shooting session is an adventure, and they are starting to see the fun.  They both find the steel knock-down targets 100 times more fun than putting holes in paper, and practice has them starting to be pretty good shots.

Our Kitchen Faucet And Pipe Replacement