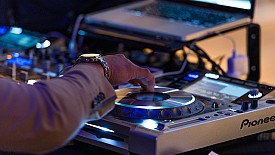 Ever been struggling on deadline and felt your energy levels, and your efficiency, lagging? Drink all the tea and coffee you like, and you still find yourself moving sluggishly, trying to recapture your mojo. So maybe that's the point where you put on some music, whether it's pop, jazz, classical, or something else entirely, to get yourself back on track.

It turns out that music doesn't just increase efficiency for people. An amazing study from Imperial College London shows that playing certain kinds of music to a specific type of solar panels can increase their efficiency by as much as 50%. So the next time your neighbors complain about the music, tell them you're doing it for science.

Okay, not really. But really, the study is valid, and here are the details.

The researchers were working with zinc oxide solar panels, which may just be the next wave of solar technology. They're flexible, which means they can be used in a wider range of applications, and they're also much less costly to produce. This means savings for consumers in the form of a lower buy-in cost for obtaining and setting up solar panels, which is good news for scientists trying to increase the adoption of alternative energy among members of the general public.

However, there's a problem: these great solar panels are still very experimental, and they're not terribly efficient at converting the energy of the sun into energy we can actually use. Researchers knew that exciting the molecules of the panels with specific frequencies and vibrations could potentially make them more efficient, so they decided to experiment with music. They played a variety of musical genres and styles to experimental panels and then noted the effect on their performance.

What they found was that the panels seemed to "prefer" pop and rock music. Researchers theorize that this is likely due to the wide range of frequencies involved, rather than any specific musical taste on the part of the solar panels. Unlike you -- or your Los Angeles roofers -- solar panels don't seem to have a strongly developed sense of musical aesthetics.

Clearly, pop-boosted solar power isn't terribly practical (although it could be handy at daytime festivals and concerts!) but what it does show is that solar panels could be installed in areas with high levels of ambient noise to take advantage of the sound as an efficiency booster. And that has major implications for the use of solar in urban areas, where noise is usually an issue that people complain about; imagine a world where it's actually something beneficial that helps a city generate energy for itself!

Thus far, these findings are primarily theoretical: while they've been tested and demonstrated in the lab, more research is necessary to confirm them and find out if they have real-world applications before actually manufacturing any products that take advantage of the pizoelectric effect, the phenomenon responsible for the efficiency increase. Still, it's not that far-fetched to project that someday, solar panels that love Lady Gaga as much as you do might be hitting shelves at a home improvement store near you; and your electrician will be delighted to install them so they can get to work generating energy for you.