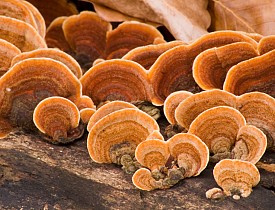 We all know mushrooms can be magical, but who knew you could build with them? Well, California-based artist and inventor Phil Ross did just that. Ross's pioneering structure is currently on display at the Kunsthalle Düsseldorf museum in Germany.

The structure, dubbed Mycotectural Alpha, is a six-foot-long tea house (an apt description, as the whole thing will be broken down bit by bit, boiled into tea, and served to museum patrons). It looks like a crunchy igloo, but in this case functionality trumps aesthetics.

The 400+ mushroom bricks used for the structure were not made from the fleshy fruiting body of the mushroom you find at the supermarket. Rather, they were made from the subterranean net-like mycelia (mushroom “roots”), often unseen and obviously unappreciated. Mycelia form fungal colonies which can live thousands of years and span miles and play a vital role in the life cycle of forests.

They also grow quickly and are strong enough to break through concrete and granite. A strand of mycelium can hold up to 30,000 times its own weight. When dried, it insulates better than manufactured materials and is water resistant and nontoxic, and in tests the material has been proven to tolerate the heat of a blowtorch. And yet, it is 100% biodegradable if left exposed to the elements (the same as wood). These properties make mycelium a perfect insulation material.

While Ross may be the first person to build a whole structure out of mycelia, Eben Bayer and Gavin Mcintyre of the New York-based green start-up Ecovative Design are turning the idea into a marketable reality. Their product, still in testing, is appropriately named Greensulate. They aim to release it for commercial use by 2011. They already have a packaging material on the market called Ecocradle, which they hope will be the Styrofoam of the future.

As it is, Ecocradle is beyond eco-friendly. Unlike petrochemical packaging materials, it is grown, not manufactured. And unlike plants, mushrooms don't require light so there's no need to consume energy with expensive grow lights. In addition, Ecovative claims on their website to be dedicated to sourcing their mushroom food from local waste, stuff that is otherwise worthless trash.

So how does the magic happen? The material is formed by first inoculating a bag of sterile growing material with the fungus. Amazingly, mycelia love to metabolize industrial waste like rice hulls, cotton burrs, and wood shavings. (They'll even digest petrochemical waste and render it inert if you feed it to them!) The inoculated materials are left in a plastic mold as the mycelium grows. After a few weeks, the fungus has digested the waste material and in return grown a solid block of mycelia in its place. After another short growing period, the block is removed and dried for another month.

This process uses only 1/8 the energy and produces only 1/10 the carbon emissions of traditional petrochemical manufacturing. And don't worry about allergies, either, as the process doesn't use any spores and is completely natural.

Right now Ecovative is a small company with some big ideas. It will be exciting to see where this new application of an ancient and abundantly available material leads. As for Ross, he plans to continue his exploration of mycelium as a building material, next time building a larger structure and experimenting with different shapes.