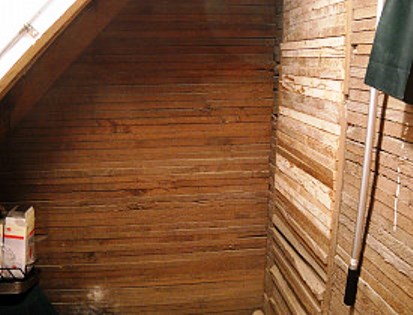 Decades ago, a number of homes were built using a method known as "crib construction," where boards were stacked like pancakes inside walls. The idea was to use the width of the boards to create insulation, but the concept fell by the wayside over the years. I had the opportunity to view one of the last 30 crib construction homes in the country, and to see how you can create a warm blend of country and ultra modern.

In 2007, Jane Bryden and her husband purchased the rare home and began applying their own touches. "We got to do all the fun stuff, really," smiles Bryden.

The house came with an interesting history besides its unusual construction. Built in 1830, the residence was part of a working farm for nearly a century. In 1920, the property was purchased by a collective, which turned it into a men’s country club. "There was even a trout hatchery here. [Members] would come to play cards, shoot skeet, or play horseshoes," Bryden recounts. However, in the 1980s, the club closed and the property sat in disrepair for more than 30 years. "It was derelict. There were holes in the roof – it was really a mess." 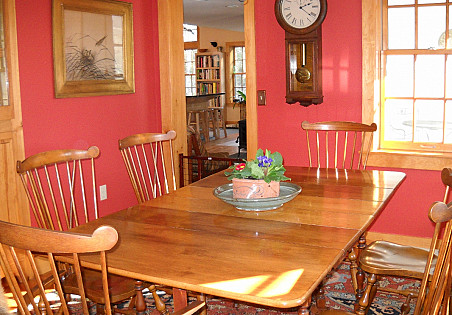 The property nearly fell into the hands of developers, but was championed by a local land trust and conservation commission, leading to the preservation of the house. The initial remodeling work was done by a former owner. "It was all white walls when we bought the house, but the former owner had saved a lot of the old doors and preserved a lot of the wood flooring," said Bryden.

The couple not only painted walls in warm earth tones; they also reconstructed many of the rooms in the house, with the help of an architect. 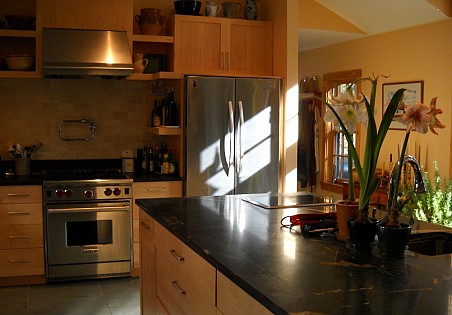 The kitchen is a focal point in the home, because it was so important to Bryden's husband. "He’s a great cook," she remarks.

The kitchen remodel is light-filled and designed to allow several people to work easily together preparing food or cleaning up. There is an industrial-style gas stove and a large stone island in the center of the room with its own sink and built-in induction burner. Bryden mentions that the stone is a type of mica schist from a quarry in Ashfield, MA. The kitchen also has an entire wall of south-facing windows. "When the sun comes pouring through, it’s marvelous."

While much of the flooring is the original hardwood, there are stone floors in areas such as the bedrooms and bathrooms that have radiant heat built in. The master bedroom also has a free-standing wall and a loft. "The architect raised the ceilings too – it’s a relatively small bedroom, but it gives the feeling of spaciousness," remarks Bryden. The bath off the master bedroom boasts a large shower with a glass wall. The sink, with a mica schist countertop, rests on wooden cabinetry just outside the bath.

Bryden was able to save the old tub in one of the home’s bathrooms and have it sandblasted. 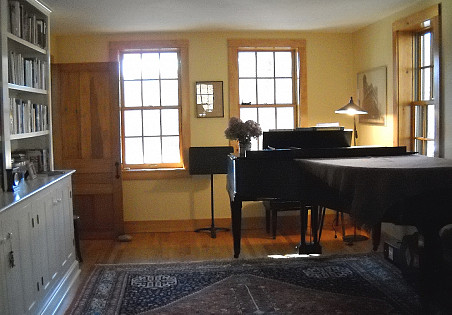 In one area of the house, Bryden found it "problematic" to figure out what to do with the long, narrow room that once served as the clubhouse. The couple chose to turn part of the space into a music room, complete with grand piano, and put a wood stove and lots of cabinets and bookshelves into the other half. "The cupboards are very old New England," explains Bryden. "This was also the room where you could see the sky through a big hole in the roof. They just had a tarp covering it."

In addition, the property had an old two-seater outhouse that the couple turned into a garden shed and a barn which was almost completely rebuilt. However, the barn does retain many of its old chestnut beams. Some of the cabinetry that was originally in the house was moved to the tack room. 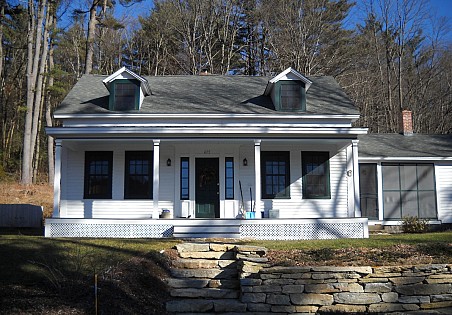 The house has five different heating zones. "The upstairs is usually really cold," according to Bryden.

The crib construction homeowner says that they were required to keep the classic farmhouse look for the outside of the house. However, the inside is like stepping into another world. "I was obsessed when I moved here."

Two Beautiful Bathroom Remodels, One At A Time