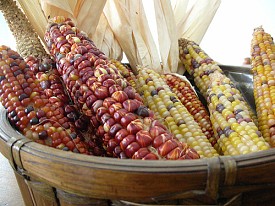 Corn was one of many brilliant domestications performed in Mesoamerican culture, with roots tracing back to ancient Peru and Mexico. Brilliant indigenous peoples transformed corn from a grass with a tiny and basically useless seed to a majestic crop yielding big, juicy cobs that are grown and eaten all over the world today. While corn sometimes gets a bad rep, pure, fresh corn really is delicious, and it's high in fiber, too.

If you're thinking about adding corn to your home garden this year, you might be in for a world of surprise, because it comes in a dazzling array of types. You may have seen the amazing Glass Gem Corn produced by a Native American farmer, who painstakingly interbred several corn varietals to get this beautiful cultivar. Or perhaps you've heard of On Deck, a hybrid corn specifically bred to thrive in containers on balconies, decks, and other cramped spots. (Normally corn likes a little more room.)

But this is just the tip of the cob (forgive us) when it comes to your options for growing heirloom corn. Heirloom varietals include corn cultivars that are decades and centuries old, and many are available through organic sources. Some can't be widely obtained commercially because they don't perform well in mass production, so you may need to avail yourself of a seed exchange or heirloom seed company to find them, but it's totally worth it for uniquely tasty corn.

Do you love delicious buttery popcorn? You might be intrigued by Pennsylvania Butter-Flavored Popcorn, a cultivar which appears to have originated in the late 1800s. It tastes, as you might imagine from the name, like it's been buttered, even though it hasn't. That outstanding and unique flavor is a pretty neat party trick -- and a great way to cut calories while you're stressed out with remodeling or other big life changes.

Ha-Go-Wa Seneca Corn has a pedigree dating back to at least the 1500s, and it's an important part of the tribal identity and history of the Seneca people. It's extremely hardy and a bit short, making it good for smaller gardens, and thanks to the narrow leaves, it doesn't overshadow companion plants. This makes it a great choice of performer for home gardeners with limited space. It's used mostly for grits and related foods.

Feeling gothic? Try Black Mexican corn, which is dark blue to purple or black, depending on the strain. (Corn can be very tricky to breed and maintain, because it relies on humans to pollinate it, and it quickly becomes inbred.) It's been documented since at least the 1800s, and matures in as little as 75 days! No waiting around for this corn. Sehsapsing is another dark blue to black corn that's ideal for small gardens, which can be eaten green as fresh sweet corn, or allowed to dry and used as flour corn.

You have to love a name like Howling Mob, a cultivar released by venerable seed company Burpee in 1906. It matures early and comes with a stout husk good for wrapping foods to steam or bake. It's worth giving this heirloom specimen a go!

Just want some novelty? Check out Strawberry Popcorn, which is about the cutest thing we've ever seen. This heirloom cultivar produces tiny cobs with dark red seeds that make great decor as well as popcorn fodder. Turn heads in your Dallas garden with this adorable heirloom cultivar, which serves as a colorful reminder that corn doesn't just come in bland and generic "white" or "yellow" cobs!

Need help starting your corn from seed? We've got you covered with this seed-starting guide.