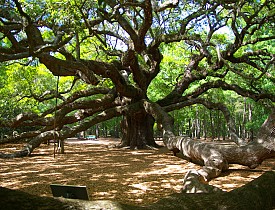 Chances are, you may have a champion tree in your own neighborhood and not even know it. For more than 70 years, the mission of The National Register of Big Trees, coordinated by American Forests, a nonprofit based in Washington, DC has been “to preserve and promote the iconic stature of these living monarchs and to educate people about the key role that these remarkable trees and forests play in sustaining a healthy environment.”

Champion trees are documented using a formula that takes into account the circumference, height and crown spread of individual trees. Find out if you have one in your own local landscape.

1. The Osage Orange at River Farm in Alexandria, VA

New national champions in 2011 include the Osage Orange (Maclura  pomifera) at River Farm, the headquarters for the American Horticultural Society in Alexandria, VA. It’s over 200 years old and is prized not only for its age and size, but for the cool environment created under its canopy.

In the southern United States, live oaks (Quercus virginiana) play an important role in many people’s lives and there is even a Live Oak Society. Started in 1934, it now includes over 6000 members in 14 different states and is operated by the Louisiana Garden Club Federation, Inc.

In Mandeville, Louisiana near Lake Pontchartrain is the Seven Sisters Oak, considered the largest live oak in the country. This champion has a circumference of 467 inches, a height of 68’ and a crown that spreads to 139’, twice as wide as the height of the tree. This live oak is estimated by some foresters to be 1500 years old.

One of the world’s biggest swamp cypresses (Taxodium distichum) is found on Cat Island, a national wildlife refuge in one of the turns of the Mississippi River  near St. Francisville, Louisiana.  It has a girth of 17’. Sadly, in January of 2012, the Legendary swamp cypress near Longwood, Florida, known as “The Senator” which was 118’ tall and thought to be 3,500 years old was destroyed by fire.

According to Monumental Trees the tallest tree in the world is a coast redwood (Sequoia sempervirens) named Hyperion. Discovered by naturalists in a remote section of Redwood National Park in California, it was measured in 2006 and is at least 379’ tall. This vigorous specimen is believed to be about 600 years old (which is young for a redwood).

Related: Urban Forestry and Your Home, The Magic of Banyan Trees, The Right Tree in the Right Place

Erica Glasener writes for Networx. Get home & garden ideas like this on Networx.

New Cedar Fence Lets Our Dog Get His Exercise