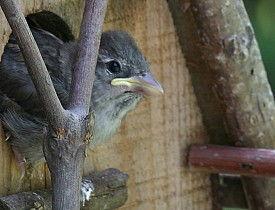 Damage to your garden is caused by a relatively small percentage of insects -- but they can be incredibly destructive. Fortunately, these insects have many natural animal predators. Attracting and encouraging beneficial animals should be part of an integrated pest management strategy for home gardens. Try these expert tips for attracting a variety of beneficial animals and insects.

Many birds like to eat the grubs and insects that wreak havoc on a garden. To attract birds, plant bushes and trees with edible fruit, and keep bird feeders stocked. If you want to keep a bird feeder, change the water once a week, and consider using a mosquito larvicide if necessary.

Add a birdhouse designed for the beneficial birds in your area. Your local Cooperative Extension office should have information about local birds, as well as plans for birdhouses.

Joyce Latimer of Virginia Cooperative Extension suggests using groundcovers in place of turf. Put in plants that grow to different heights to attract different birds. And leave fallen leaves in place (within reason!) to allow birds to hunt among them for insects.

Urban chicken farming also is growing more popular. In addition to providing a steady supply of fresh eggs and fertilizer, chickens can eat unwanted grubs and insects in the yard.

Latimer states that a group of about seven bats can eat 10,000 insects per night. Bats may naturally use a hollow tree as their daytime retreat. Otherwise, consider installing a bat house to attract these predators of garden pests.

A bat house should be at least two feet tall, with chambers 14 or more inches wide, according to Bat Conservation International. They should also be properly vented, and the wood in the roosting chambers should be scratched and roughened to help the bats get a grip.

BCI notes that only 50 percent of urban and suburban bat houses typically house any bats. Bats must find the house on their own, which can be a slow process. Lures, including guano, are generally considered ineffective. If bats don’t find your bat house within two years, it should probably be moved and possibly redesigned.

Frogs and toads are also hearty insect consumers, who help control mosquito populations. Attract frogs to a pond by building up vegetation around the edge and creating shallow habitats where they are less likely to be eaten by fish.

Be careful what you wish for with frogs and toads, however. They can be very noisy, especially during mating season, and may attract other unwanted predators, such as snakes.

Ladybugs are perhaps the most famous beneficial insect, and with good reason. Both larval and adult ladybugs eat copious quantities of aphids and other damaging insects. However, there are plenty of less “cute” insects that are equally beneficial, including ground beetles, rove beetles and lacewings. Praying mantises may seem scary, but they are actually good garden helpers. Parasitic flies and parasitoid wasps also kill unwanted insects in other ways.

Rather than working to attract many of these beneficial insects, it may seem easier to just buy some ladybugs or other insects online or at a local garden center. However, this might be a waste of money, or worse. They are likely to fly away from your garden. Such insects also are typically not native to your area. Some ladybug species and other insects are being depleted to an unsustainable degree in their native habitat while potentially becoming dominant and invasive in their new, foreign habitat.

Instead, to attract insects, Utah State University Entomologist Erin Hodgson suggests planting a wide variety of flowering native plants. In addition to the low-water, low-maintenance advantages of native plants, they will also attract native beneficial insects. Choose long-blooming flowers and plants that bloom at different times of year. Plenty of pollen and nectar throughout the growing season will attract loads of beneficial insects.

Also, because many pesticides indiscriminately kill good and bad insects, minimizing their use will allow more beneficial insects to thrive and do the work of pesticides.

Most spiders get a bad rap. They are harmless to humans, but they trap and kill insects. Spiders are very common and widespread. It doesn’t take much to attract them. Then simply avoid killing the spiders and destroying their webs.