Kitchen garden harvest: A history of pickling at home 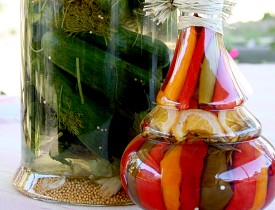 When most people think of home pickling today, they think of cucumber pickles sealed in a jar with vinegar. However, that is only one of two general methods of pickling: Lacto-fermentation and vinegar pickling. Both methods rely on an acidic environment for preservation, the former producing lactic acid and the latter employing acetic acid, and both can be used to pickle almost any food.

Both methods, or variations on them, have been used for thousands of years by individuals and industry to preserve the bounty of productive times for the dearth of winter or famine, or to transport food long distances. While for much of human history food preservation was a necessary means of survival, it has also developed into an art form in many cultures.

Some more exotic takes on lacto-fermentation are nuka bran pickling (nukazuke) and sake lees pickling in Japan where each household often has its own living “nuka pot” which is sometimes passed down from generation to generation, not unlike yeast strains for bread or beer making in other countries. For many Japanese, the taste of a nukazuke pickle is quite nostalgic.

Vinegar was used for food preservation at least as far back as Roman times. It was used to preserve everything from eggs to vegetables to raw meat and whole bird carcasses. Again, remember, this was all a practical matter before the era of refrigeration and vacuum packing.

Vinegar pickling took a huge conceptual leap forward in the 19th century after the work of Nicolas Appert, a french chef and food innovator, and Louis Pasteur, after whom the eponymous process “pasteurization” was named.

Appert developed methods for sterilizing and hermetically sealing food in jars which gave birth to the modern canning industry. Pasteur provided the science behind the process. Along with these innovations, Kilner and Mason jars were introduced in the mid-19th century. With their screw-on lids and wax or rubber seals, they provided an airtight seal which allowed for easier home canning, and thus easier home pickling.

Pickling in the US

Home pickling was just part of day-to-day life for most Americans until the beginning of the 20th century when the food system started industrializing. Home pickling became widespread again during WWII when 40 percent of commercial pickling operations were commandeered by the government for the war. So-called “Victory Gardens,” or home vegetable gardens, were promoted as a patriotic way to support the troops and war effort. Home canning and food preservation went hand-in-hand with growing food at home.

After the war ended and the food system in the US fully industrialized in the 1950's and 60's, these traditional home pickling methods were largely abandoned for industrial fare. The traditions did receive a renaissance among back-to-landers in the 1960's and 70's, and of course many ethnic enclaves in the US remained strongholds of traditional pickling methods, which continue to this day, especially among recent immigrants.

The Future of Home Pickling

Home pickling and interest in traditional food preservation is experiencing another renaissance today as evidenced by the success of publications like Wild Fermentation by Sandor Katz and The Joy of Pickling by Linda Ziedrich. Gourmet pickle shops are sprouting up all across the country, from Cultured Pickle Shop in Berkeley, CA, to Suddenly Sauer in Detroit, MI, to Brooklyn Brine in NY.

Home pickling is one of those hobbies that people love to share. You can find home picklers selling their goods at underground markets across the country and on websites like Etsy.com. As more people become wary of an industrial food system progressively saturated with chemicals and genetically modified organisms, it will be no surprise if interest in home pickling continues to grow.

Jordan Laio is a Hometalk - http://www.hometalk.com - writer. Read more articles like this one - https://www.networx.com/article/kitchen-garden-harvest-a-history-of-pic - or get help with your home project on Hometalk.com.