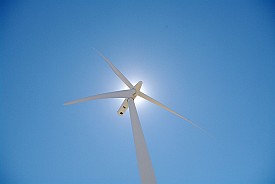 Skeptics of alternative energy raise some valid concerns when they look across an array of wind turbines or a glittering spread of solar panels: what happens when the wind stops blowing and the sun stops shining? If renewables are dependent on weather conditions, doesn't that mean they stop generating energy when the climate doesn't favor them, leaving customers without power? Would a turn to renewable energy inevitably be accompanied by backup use of power plants using traditional methods of electricity generation like burning coal, to provide a backup in case of failure?

The development of new technologies is often accompanied by skepticism, and naysayers can actually play an important role in pushing researchers to design the best systems possible. Their worries are, after all, definitely worth listening to, but fortunately for us, the technology we're discussing is changing so rapidly, and so radically, that many of these issues are being addressed. Researchers are as eager to put the days of coal-fired power plants behind them as many of the rest of us are.

Let's start with wind turbine technology. Historically, as Sami Grover points out at Treehugger, wind turbines weren't very efficient, which is a common problem with new technology. Innovations in development often lack refinement because researchers are eager to develop proof of concept, and in this case, the goal was to show that wind turbines could work. Now that they've become an established and accepted energy generation method, research has turned to how to make them more efficient, so they can generate maximum energy even during periods of low wind.

What about solar panels, though? Those need sunshine, right? Actually, not so fast, turbo. Thanks again to new technologies, some based on findings from the natural world, solar panels are capable of generating energy more efficiently (again, early panels were very clunky) and in generally poor conditions. That makes it possible to eke power out of solar panels even when the sun doesn't want to cooperate!

Thanks to improvements in the technology, we're looking at the possibility of getting more power for less, which is a good start. But what about on the other end of the equation? One way to balance the grid is to manage consumption, and that's what many utilities are starting to do.

The much-maligned smart grid, for example, can be used to encourage consumers to focus their biggest energy use during prime generation time, when energy supplies are more ample. Differential pricing can act as an incentive to do laundry, wash dishes, and more when the wind is blowing and the sun is shining. Furthermore, intelligent grid management can shunt energy where it's needed to avoid shutdowns and irregularities in supplies.

In homes, consumers can directly reduce the amount of energy they use, of course, with the use of energy-saving appliances, efficient bulbs, and sensible energy use practices. For example, laundry can be hung instead of run through the dryer on days when it's sunny and warm. Likewise, instead of heavily relying on a New York heating and cooling system, homeowners could consider a retrofit to help their homes hold more heat in winter and keep them cool in summer; better insulation, installation of double-paned windows, and new weather stripping can do wonders.

Furthermore, consumers can also, of course, install their own renewable energy systems; and if they run their homes really efficiently, they have the opportunity to sell power back to the grid. A pretty good incentive to call an electrician about installing solar panels, right?

But there's another tool in the arsenal. In addition to generating more power and encouraging people to use the available power more effectively, utilities are also improving their ability to store energy, which has always been a problem. Batteries are notorious for being inefficient, especially on the large scale of an electrical grid; it's better to generate electricity as its used. With a shift in the technology, utilities will be able to store energy and release it when needed, instead of having to rely on real-time capacity.

That means that even when it's overcast, raining, and totally still, utility customers will be able to benefit from clean wind and solar power. And that's good news!