Is There an Electric Bike in Your Garage's Future? 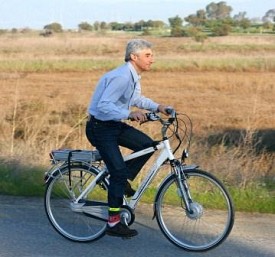 Open the garage doors of a typical American home these days and you might be surprised. Instead of owning 2.2 automobiles, many households are switching over to more eco-friendly vehicles, leaving their garage free to be used as additional living, working, or storage space. An up-and-coming alternative way of getting around is via electric bicycle, commonly known as the e-bike. How does it compare to conventional methods of transportation?

While traditional muscle-powered bikes provide a great workout and never require recharging, the electric version does have an edge in some areas, especially for those who are riding to their workplace or business meetings. In the words of one e-bike commuter: "It takes me only half an hour to ride across town to work, even at rush hour. And when I get there, I don't need to waste time showering and changing because I haven't arrived all hot and sweaty."

Today a large segment of the population is feeling the effects of aging but still wants to remain physically active. E-bicycles offer a choice between the electric function and pedaling. They are safe and comfortable for people with knee problems, heart disease, or exercise-induced asthma.

However, electric bike use is not completely problem-free. The troubling syndrome of bicyclists striking pedestrians, sometimes fatally, is made even more dangerous by e-bikers. Their vehicles are silent, so it is harder for walkers to hear them coming. Some locales have enacted speed limits and minimum ages for e-bike operation in an attempt to reduce accidents.

In far too many American cities, public transportation is inconvenient and unreliable. Especially for commuters who must make one or more transfers, it ranges from difficult to impossible to predict how long the trip will take. And frequently, bus, train, or subway service has limited hours of operation.

On an electric bicycle, the rider has more control over the amount of time it takes to reach a given destination. He or she is not confined to main streets but can work out the shortest route from Point A to Point B. What's more, electric "wheels" are accessible any time, no matter how late your shift or evening activities may end.

People who like to take advantage of transit time to catch up on their texting or snoozing are out of luck, though.

Whether you use an electric bicycle as an occasional substitute for your car or as your sole means of transportation, cutting down on or eliminating gasoline-powered automobile usage will significantly reduce your carbon footprint.

In addition, an electric bicycle is cheaper than a car to buy and to run. Riders report costs of only one-twentieth of what they formerly paid to use their car. The e-bike's major expense is recharging its battery, which runs to approximately $65 per year. You do not have to pay for registration or insurance, although inexpensive policies insuring against e-bike theft, damage, and liability to others is available.

But where riding an electric bike really stacks up favorably compared to driving is getting around the city. Typical e-bike speed using pedal assist is up to 25-30 miles per hour. Couple this with the fact that you won't get stuck in traffic jams, waiting endlessly for your turn to go through intersection after intersection.

Oh, and did we mention parking? You'll save both time spent looking for a space and money -- no meter or car park fees for you. All you will need to pay for is a good bike lock, a one-time purchase … that is, if you want protection against theft which goes above and beyond the manufacturer's built-in safeguards, such as a keyed lock for the bike battery.

And when you get home, you'll just need a small sliver of real estate to store your vehicle. As a result, when you open your garage doors, you'll have plenty of space for a games room, workshop, or home office.

Once again, there are disadvantages. An e-bike will not shield you from the weather as a car does. And if you buy an extra-large load of, say, groceries or lumber, you'll need to ask for a delivery.