How to Wire a Three-Way Switch 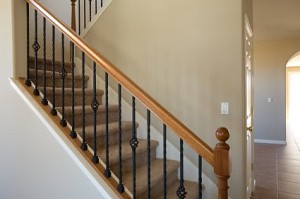 Three-way cables include a secondary red conductor wire that runs between the switches, but not through the rest of the circuit. The switches have an extra screw terminal for the extra red wire (making for a pair of "traveler" terminals), as well as the grounding screw terminal.

Connecting to Each Switch

Pull both the hot power cable and the new three-way cable into your switch box. Use the lone standard terminal on one side of the switch for the hot power line. Twist the white wires from the power line and the three-way cable into a wire connector. Then connect the remaining red and black wires to each of the traveler terminals. The main difference in understanding how to wire a three-way switch is knowing there are no designated on and off positions, and no designated terminal for the red or black wires from the three-way cable. Just make sure the red wire is connected to the same terminal in each switch. Use the standard method for wiring the fixture, but twist together the two red wires in a wire connector without connecting them to the fixture.

There are three main approaches for how to wire a three-way switch:

In short, this is a quick summary of how to wire a three-way switch. As always, electric work can be dangerous and should be approached with caution. For the best results, hire a professional electrician.