How to Safely Clear Snow Off a Roof 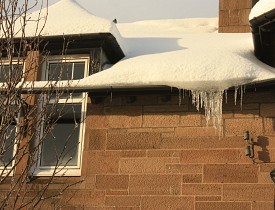 The easiest way to clear snow off a roof is to wait for spring. The second-easiest method is to call a snow removal contractor — just make sure they're licensed and insured. After that, you're into doing the job yourself. And there's a right way and a wrong way to go about it. The wrong way is climbing up there with a snow shovel, which is dangerous under the conditions and unnecessarily stressful on the roof. The right way is to use a roof rake from the ground.

A standard roof rake looks like an oversized and extra-wide gardening hoe with a really long handle, up to about 16 feet. You use the handle to lever the head onto the roof, behind a deposit of snow, then pull the tool back toward you to scrape the snow off the roof. Some rake designs are more sophisticated.

The MinnSNOWta Roof Razor has an open metal frame that cuts into the snow at roof level, dislodging it in chunks and sending them down a plastic runway and off the roof. The Phillips Snow Cutter is a conventional-style rake with two prongs on the back side of the rake head. You use the prongs to break hardened snow into a manageable piece, then flip the head over to rake it off.

How to Use a Roof Rake

Each raking technique is specific to the rake design, but in general, the idea is to remove the bulk of the snow—not all of it. There's no need to scrape down to the shingles like you do with your front walkway. It's very common for homeowners to damage their roofing and gutters by striking and scraping snow and ice buildup with any variety of tools, including roof rakes. The other general rule to follow is to remove the snow in a fairly systematic fashion. If the snow depth or weight is significant, be careful to remove the snow a little bit at a time from opposing roof planes. You don't want to unload one side entirely while the other side remains full of snow, creating a serious weight imbalance.

When to Clear a Roof

The weight of snowfall varies considerably, depending on how wet it is. And there are other factors that contribute to hazardous roof loads, such as ice buildup and snow compaction due to recent weather patterns. This means there's no rule of thumb for when to clear your roof. Instead of making an uneducated guess, simply check with your local government office, city building department or news sources for recommendations. That said, don't ignore signs that your roof is in danger of collapse. These might include new cracks in ceiling surfaces, creaking or groaning sounds coming from the roof structure and doors and windows suddenly failing to open or close properly.