How To Make Do With a Poorly Equipped Apartment Kitchen 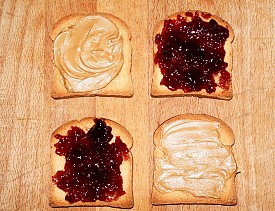 This lack of cooking ware, however, should not stop apartment dwellers from attempting to follow complicated recipes they get from watching the Food Network at 3:00 AM. Don’t give up just because you don’t have 5 out of the 6 utensils you need. You can figure this out.

The first problem you’ll likely encounter is your previously mentioned lack of a measuring cup. Guess what, though? Your roommate has a blender. He just does. It’s what roommates do. And, blenders have graduated measuring marks on the side. Ergo, you have a measuring cup. Problem solved. (Old yogurt containers also work as measuring cups.)

Measuring spoons are another issue altogether. Your roommate’s blender isn’t going to help you out here. Instead, use the cap from your NyQuil bottle. If you don’t have a NyQuil bottle, get a NyQuil bottle. Or, you still have another option. You can use a stick of butter to measure out tablespoons of flour or any other powdery ingredient.

The sticks of butter in your refrigerator are wrapped in paper that has tablespoon measurements printed on it. So, here’s what you do. Carefully unwrap a whole stick of butter and remove one tablespoon of it. Rewrap your stick of butter, leaving the end with the now-missing tablespoon open. Then, turn the stick of butter upright with the open wrapping end facing the ceiling. You will see that you can now pour flour into the paper. Just spoon the flower atop the butter until it reaches the first tablespoon marker. You’ve now measured a perfect tablespoon of flour. Also, you are a genius.

Next, you might find that you need a steamer. You don’t have a steamer. Obviously. If you were the type of person who had a steamer, you’d also go to the gym, and you do NOT go to the gym. What you do do is get pizza delivered no fewer than twice a week and wrap the leftovers in aluminum foil. Well, that aluminum foil is now your steamer. Put about four plies of foil together, mold it into a basin shape, and jab holes in it with a steak knife. You’ll find it fits perfectly inside of your pot because it’s foil and you can make it whatever size you want.

Now, let’s deal with kitchen shears. Those are important. Kitchen shears can help you easily remove the backbone of a still frozen duck in seconds. But, what can also help you remove a frozen poultry backbone is that pair scissors in the drawer with all the pencils -- or, more specifically, the scissors from the drawer with all the pencils plus 45 minutes. It takes an excruciatingly long time to cut anything frozen with pencil drawer scissors, but it is doable. What is not doable is effectively cutting gift-wrap with those scissors anytime thereafter. Those scissors will lose any semblance of a cutting edge by the time you’re done butchering a frozen bird. But, why are you even worrying about giftwrap right now? You just had DUCK. IN YOUR APARTMENT. Relax, and start putting gifts in those shiny bags with crinkly tissue paper.

With these helpful tips, you can now feel more confident watching a marathon of Good Eats in the early morning hours. There’s nothing Alton Brown is going to cook that is so complicated that you can’t make all the necessary tools yourself using the six things you actually do own.

Noah Garfinkel has never called a New York City plumber, because his landlord does that. Get home & garden ideas like this on Networx.com.

A Major A/C And Furnace Replacement