How to Get Rid of Spider Crickets 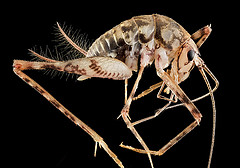 Beware the attack of the giant mutant crickets! Spider crickets, which look like a cross between crickets and spiders, are excellent jumpers and when frightened, will hop towards you, rather than away. This weird behavior, combined with the insects' extra-large size, makes a home infestation of spider crickets a decidedly unpleasant experience. You'll be relieved to know, however, that there are methods of controlling the creepy creatures.

What Are Spider Crickets?

Spider crickets, also known as sprickets, cave crickets, or camel crickets, get their name from their hunched back and their long legs, which resemble a spider's. Their plump beige bodies with darker brown markings can grow as long as 4 inches. There are a number of spider cricket species; the Asian version has begun proliferating on the East Coast within the past few years. An outstanding feature is that they are silent, and do not make the insistent chirping sound you usually associate with crickets.

Why Are Spider Crickets a Nuisance?

Although these bugs don't bite or sting human beings and are not believed to be carriers of disease, they do have a number of nuisance effects.

Where Do You Find Them?

The spider crickets thrive in cave-like environments -- damp and dark. They shun the sunlight and instead enjoy hanging out in your crawl space and around your washing machine, sink, shower, or toilet, especially below ground. After Hurricane Sandy, large numbers of spider crickets were found enjoying the moisture of recently flooded basements in the region.

The reason for their preference is quite simple -- although spider crickets are omnivorous, their favorite foods are the fungi and molds which grow in damp spaces indoors.

How Can You Get Rid of Spider Crickets?

1. Adopt a cat … or maybe two! Felines are fascinated by spider crickets' hopping motions and will hunt them.

2. Vacuum up the crickets to reduce your home's insect population, but only temporarily.

3. Sprinkle borax in spaces where the critters tend to gather. Borax, in crystal form, is sold as a laundry booster. It is considered to be mildly to moderately toxic to human beings when inhaled, so use it with care.

4. Set out bowls of water so that the spider crickets will climb in and drown. This method is certainly non-toxic, but it is messy and time-consuming.

5. Use glue traps, adhesive-coated sturdy cardboard that can be left in sheet form or folded into a box. The most successful solution, traps do not contain pesticide and will not poison children or pets. The downside is that you will periodically need to take the filled traps to the garbage. Ugh!

6. Consult a pest control expert for advice on how to get rid of spider crickets safely and keep them from coming back. Usually the best prevention methods include: