How to Flush Your Toilet and Waste Less Water 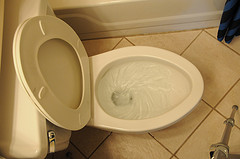 Americans are a contradictory bunch. We care a great deal about recycling and saving energy. (Yay!) Yet at the same time, many of us remain blissfully unaware of another essential resource that is being wasted on a regular basis. That is clean water. The average American literally flushes 24 gallons of potable water down the toilet every single day.

It doesn't have to be like that, though. There are plenty of ways to reduce how much water your toilet uses and none of them is very expensive, painful, or difficult. Let's take a closer look.

Contrary to popular belief, not flushing the toilet every time won't lead to a disgustingly malodorous bathroom -- at least, as long as you and your housemates keep yourselves properly hydrated. (In fact, one of the most noticeable symptoms of dehydration is concentrated urine that tends to have a stronger smell than usual.) To avoid stubborn mineral deposits, flush after every 2 or 3 urinations and scrub down the inside of the bowl with a toilet brush, assisted by a little white vinegar if necessary.

Reducing the amount you flush won't save you much cash, only a few dollars per year. However, it will conserve something more precious than money … clean water. Older model toilets are water guzzlers, using anywhere from 3.5 to 7 gallons for every flush. That means reducing your flushing to every second time could save about 10,000 gallons of water annually.

When You Need to Flush Twice

If flushing the toilet every time you use it is less than optimal, flushing twice for one "go" is even worse. A buildup of lime scale under the toilet bowl rim will slow the flow of the flush water; try removing it with a paste of white vinegar and baking soda, left undisturbed for several hours. Should that prove unsuccessful, you may need to replace the flushing mechanism.

Beware of recommendations to place a brick in your toilet tank as a water-saving method. The theory goes that the volume of liquid which the tank can hold, and therefore the volume per flush, will be reduced. While this seems logical, dropping a brick into the tank may damage its mechanism. Some people also claim that the brick might disintegrate with time, causing even more serious problems. Substitute something like the natural rubber Drop-a-Brick for a similar effect that's easier on the plumbing. However, check with a plumber before adding any kind of gizmo to your tank if you have a newer model toilet. Otherwise you might end up breaking the air lock, allowing the lovely scent of sewage to permeate your home.

A type of greywater system is available that will recycle the water which goes down the drain of your bathroom sink and redirect it to flush the toilet. Smaller than a whole-house model, a greywater toilet system can be installed neatly in a powder room cupboard and holds enough water for approximately 2 flushes, depending on the make of your toilet. A super simple variation on this theme is collecting the runoff from your shower in a bucket and using the "quick-pour" method to flush the toilet with it.

One of the most reliable and, especially for families with young children, most practical ways to reduce water wastage through flushing is to replace your old toilet with a dual-flush system or a low-flow model. A WaterSense labeled toilet is certified to use only 1.28 gallons or fewer for every flush. Even better is a composting toilet, which is water-free. The aforementioned fear of smell is taken care of by a low-wattage fan which wafts away any odors. Before you install a composting toilet, though, do make sure that your local health department gives it the thumbs up.