How to Clear Ice from Your Sidewalk 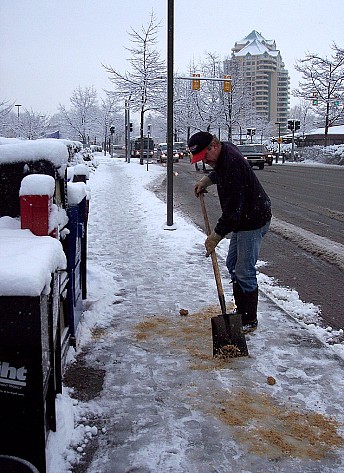 In quite a few municipalities, the onus is on homeowners (and building owners) to clear snow and ice from sidewalks adjacent to their properties. In many of those cities, residents face fines if they fail to clear the ice from their sidewalks, as well as possible liability in court cases resulting from slip and fall injuries. I went looking to some of the snowiest, iciest municipalities in North America (meaning Canada, too!) for advice on how to clear ice from the sidewalk. Did I learn much? In terms of technique, not really. However, I did pick up a few environmental tips and some snow removal etiquette inspiration.

There is really only one basic technique for removing ice from sidewalks, and it involves burning calories. First, shovel while it is still snowing. If you do not allow snow to accumulate, you're less likely to see that snow turn to ice through freeze-thaw cycles. Once you've cleared the snow right down to the pavement, apply sand or the ice melt granules of your choice to prevent ice formation and to provide traction. There's some debate about the best ice melt; some municipalities suggest sand, others suggest salt, and others suggest using only calcium chloride. (We'll get to why later in the article.) If you end up with a buildup of ice on your sidewalk, cut through it effectively by hacking at it with a garden edger or pick. Once the ice has been loosened sufficiently, shovel it away, and then apply your gritty sand or salt-esque substance.

If all this sounds like too much for you, you can always hire a landscaping service to do the job in your stead.

Let's have a look at what public works departments in cities across the US and Canada have to say about removing ice from your sidewalk:

The Cambridge, MA Department of Public Works says, "Use ice melter with calcium chloride (CaCl2), which is the best choice for the environment and only a small amount is required to melt ice. Potassium chloride (KCl) is okay, too. Avoid rock salt (NaCl or sodium chloride), which kills plants and trees. Do not use sand. It doesn’t help pedestrians; but it makes hard ice more slippery. It gets into street drains and is expensive to clean up in the spring."

However, just across the Charles River, the City of Boston says, "Remove ice to bare pavement or make as level as possible and treat with sand, sawdust or similar material." In neighboring Somerville, their DPW merely says, "Homeowners must shovel, salt or sand their sidewalks when it snows." Will Boston concrete contractors have to do costly sidewalk and road repairs in the spring? Are the Cantabrigians on to something?

How long do you have to clear ice off the sidewalk? New Yorkers have four hours to clear their sidewalks if it snows between 7 AM and 5 PM, and then "The City may issue property owners a summons for a failure to clear the sidewalks within these time frames."

In Chicago, you have only three hours to clear the snow off the sidewalk, and folks who don't do it can face fines of $50.

You definitely don't want to leave ice and snow on the sidewalk in Ann Arbor, Michigan. They issue fines of up to $1000!

Toronto has a nice snow and ice clearing system: "In much of Toronto, the City provides mechanical sidewalk snow clearing." However, their municipality reminds residents that the municipal snow removal service can take up to 72 hours.

True to the way that Canadians seem to do things right, the City of Edmonton explains the freeze-thaw cycle, and even gives out free sand to residents: "While properly removing snow prevents a build-up of ice over the winter, freeze-thaw weather cycles cause water from melting snow to run on to cleared walks. The water then becomes ice when the temperature drops. You are still required to keep the walks around your property safe during freeze-thaw cycles, either by keeping them ice-free or by spreading sand or gravel to give pedestrians traction. To help you keep your walks safe, the City provides free sand that can be picked up from green boxes outside your nearest Community League."

The best advice comes from the City of Madison, Wisconsin: "The sooner and more completely you shovel, the less likely ice will form."