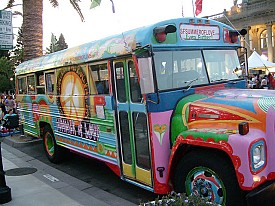 It was the Baby Boomers the Who were referring to when they rocked "My Generation" on the stage at Woodstock. (And if you have to ask, "Who the heck are the Who?" or, worse yet, "What was Woodstock?" you can rest assured that you are definitely not a Boomer.) Born between 1946 and 1964, these products of the post-World War II baby boom number about 75 million in the US. They have been a major influence on American culture since the first members of their generation came of age in the Sixties. Although as a group, Boomers tended to adopt a very anti-materialistic stance in their youth, most of them mellowed enough over the years to acquire homes and other worldly possessions. They still demonstrate their distinctiveness, however, when it comes to attitudes toward home improvement.

Contrary to the belief of many of today's 20-something bloggers, environmental awareness originally blossomed on a wide scale in the heyday of the Boomers, with the popularity of Rachel Carson's book The Silent Spring and celebration of the first Earth Day. Many of these grown-up flower children have continued to demonstrate their concern for the Earth by concrete actions such as faithfully following a vegetarian diet, gardening, and recycling. When it comes to saving energy, they are more willing to conserve home heating than are young Millennials. Eco-friendly measures like improved sealing and insulation or installation of energy-efficient windows are high on their home improvement priority lists.

The generation that was never going to get old began reaching retirement age in 2010. However, rather than downsize to a condo in the sun, the majority of Boomers (close to two thirds, according to Nielsen's Demand Institute 2014 survey) are choosing to stay in their own homes. They will tend to remodel multiple rooms of their house, though, for a number of reasons. First of all, creating a master bedroom on the ground floor or remodeling a bathroom with grab bars and a shower seat makes aging in place a much more practical proposition. Second, as this demographic group moves from late middle age into the senior years, with the decrease in mobility which that entails, they are looking to center more of their leisure activities in their homes. Popular remodeling projects include installing a home gym or a media center. Finally, for those forced to delay full scale retirement plans due to the 2008 economic downturn, setting up a home office for consultancy or other freelance work can be a very practical action.

Although some cultural historians believe that "My Generation" should be termed the Me Generation, that question is up for debate. A large percentage of Baby Boomers certainly do show concern for their children in the type of home improvements that they carry out. As a rule, they do not opt for the latest fads in house decor like in-home spas, but rather for major renovations that will tend to increase the long term value of their property, for example, a mid-range kitchen remodel with Energy Star appliances, the construction of a deck or patio, or converting an attic or basement into usable living space. The reasoning is that these types of upgrades add to the financial legacy that the Boomers will eventually pass on to their offspring.