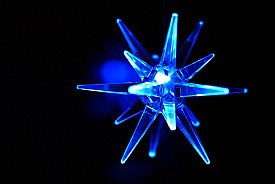 We know it's only early November, but signs of the winter holidays are everywhere around us, including lights, lights, lights! Which are a welcome sight in the northern reaches where it feels like we only get a few hours of natural light a day. However, a whole lot of those lights are highly inefficient, and chances are high that you might be harboring some strands of old-school Christmas lights somewhere in the house. Maybe you're saving them for the tree, or decorating the outside of the house? Perhaps they're even neatly stored instead of tangled?

Well, this is the year you need to get with the program and get rid of them. Older Christmas lights are highly inefficient, adding significantly to your energy bill, and they pose some electrical safety risks. It's time to join the LED revolution, and Home Depot has an amazing incentive for you: a sweet discount on LED lights.

That's right: through 17 November, if you bring your outdated lights to a store, the friendly staff there will hook you up with an in-store discount, allowing you to go energy-efficient without needing to break the bank. Pretty great, right? (And we swear, we're not shills for Home Depot: we just think this is a really great program -- independent hardware and home supply stores in your area may also be offering similar deals!)

Not convinced? Here are some of the advantages of going LED, a light source increasingly praised by electricians:

*Unlike conventional Christmas lights, they don't carry a risk of unsafe levels of lead.

*If everyone switched to LED holiday lights, the United States would collectively save $410 million. That's a lot of presents.

*LED lights carry a lower risk of fire, because they don't get as hot as conventional holiday lights. Trust us, having to call in a Seattle remodeling company to rebuild or repair your house after a holiday fire is no fun.

*They're a cinch to program and control, for those setting up epic holiday light displays.

*They have a very long shelf life -- buy LED lights today, and you won't be replacing them every few years as with conventional lights.

*LED lights are weatherproof, letting you use them indoors and out with minimal risks; although you should make sure you are using an outlet approved for outdoor electrical use!

*Like conventional holiday lights, they come in a range of colors and styles, including strands, nets, snowflakes, and more.

*Costwise, LEDs actually aren't more expensive than conventional lights, and in some cases actually clock in cheaper. A whole lot cheaper, in fact, if you take advantages of deals like this one offered by Home Depot!

We think these are some pretty solid reasons to make the switch, if you haven't already -- and they also make LED lights designed for use in menorahs, incidentally. You'll save money, reduce your energy consumption, and enjoy a safer home this holiday season with LED lights.