Getting Jiggy With the Jigsaw 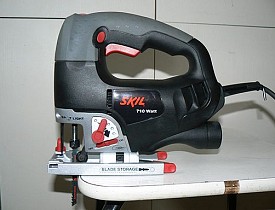 If you're interested in dabbling in a variety of DIY projects, and your budget has room for just one power tool, the jigsaw is your best bet, hands down. Like a circular saw, it makes straight cuts and bevels; like a band saw, it cuts curves. It also does a nice job with a wide range of materials, including lumber and sheet goods, metals and plastics. The friendly ergonomics and sewing-machinelike action of a jigsaw make it a great power saw for beginners to cut their teeth on, yet it's by no means just a "starter" tool, as virtually every serious builder and woodworker owns one. Jigsaw technique is pretty intuitive, and chances are, if you're not getting the cut you want, simply switching to another blade and changing the speed or settings will make all the difference.

Reading Up on Your Saw

Whether you've just bought your first jigsaw or you've owned one for years, spend some time with the owner's manual to learn the ins and outs of your model. Today's quality jigsaws have loads of features, such as speed and orbital adjustment (see Choosing the Right Blade and Settings, below); blade stabilization; tilting base; and flush-cutting capability, which allows the blade to cut right up to an abutting surface. Many saws also come with accessories, like a plastic base plate to prevent scratches on delicate surfaces and splinter guards to help minimize tearout with wood cuts. You can certainly pull a new saw out of the box, load a blade and start cutting immediately, but knowing how to use the saw's features are key to getting the best performance and versatility. And although, according to Durham, NC builder Marc Cool, it is harder to cut off your hand with a jigsaw than a circular saw, we do encourage you to learn how to handle your saw safely before using it.

Choosing the Right Blade and Settings

Unlike most power saws, which have a few different blade options for specific materials and operations, jigsaws are designed to take advantage of an extensive arsenal of specialty blades, allowing you to cut everything from cold steel to leather. The right blade and, secondarily, the right settings are absolutely critical to a jigsaw's performance, so don't cheap out and try to get by with using one or two blades for all types of materials, and don't get lazy and use the same cutting speed and rotation for every job. You'll be amazed at what the right blade can do. For example, Bosch makes a superfine, 20-tpi (teeth per inch) wood blade that makes a jigsaw nearly as nimble as a scroll saw and cuts the thinnest plywood with almost zero splintering.

As for settings, on most jigsaws you control the speed with the tool's trigger as well as a dial setting that determines the speed range. You can also set the amount of oscillation, or orbital travel, of the blade; more orbit yields a faster, more aggressive cut, while straight up-and-down travel is slower and less likely to cause splintering. Your owner's manual will detail the best settings for different materials and functions, but in general you use a slower speed and straighter travel for tight curves and for dense or delicate materials (like metal, wood veneer or plastic laminate). Fast cuts in lumber call for an aggressive blade, high speed and maximum oscillation.

Starting Out in the Hole

If you've read our article on circular saws you've learned about making cutouts using the plunge-cutting technique. But interior cutouts (without cutting in from the edge of the workpiece, that is) are where the jigsaw really shines. It's far more precise than a circular saw, and it'll cut any shape you want. The trick is to begin with a starter hole: Mark the entire outline of your cutout, then drill a hole inside the lines, using a bit that's slightly larger than the width of the jigsaw blade. Insert the blade into the hole to make the cutout. You can make one starter hole for any shape of cutout, but for perfect slots with rounded ends, drill a hole at each end of the slot, using a bit that matches the slot's width. Then, make two straight cuts between the holes with the jigsaw to complete the slot.

The secret to turning tight curves with a jigsaw is making relief cuts — straight cuts made from the edge of the workpiece, more or less perpendicular to the cutting line; think of the hub of a wheel being the cutout and the spokes being the relief cuts. As you meet each relief cut while making your cutout, the waste material falls away, allowing the blade to pivot freely rather than being trapped in the groove of its own cut. Make as many relief cuts as needed to give the blade sufficient movement. They don't have to be neat since you're cutting trough waste area. Stop each relief cut just a hair shy of the cutting line, so it intersects the outside of the blade's path as the saw comes around.

As mentioned, jigsaws can make straight cuts, but their narrow blades make them difficult to keep on track. To ensure a clean, straight cut on anything longer than a small notch, clamp a straightedge to your work so the side edge of the saw's base (the metal or plastic "foot" of the saw) rides along the straightedge. For long cuts, a 4-foot level makes a great straightedge. For shorter (and quicker) cuts, use a speed square (a.k.a. rafter square, a pouch-size triangular square with a flange along one edge). Hold the square's flange tight against the front edge of the board, and position the saw so its base rides along the adjacent edge of the square, parallel to the cut line. To cut clean circles with a jigsaw, you can use a storebought circle jig or mount the saw base to a 6- to 8-inch-wide strip of hardboard or thin plywood, using double-sided tape. Pin the strip to the center of the workpiece with a small finish nail, then rotate the hardboard strip and saw around the nail, like a compass, to cut the circle.