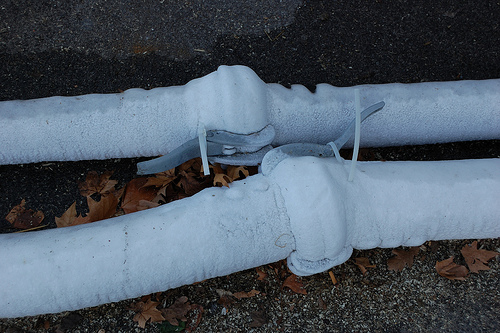 When it gets cold, you might find yourself needing emergency frozen pipes help to keep the water flowing in your house. There are some steps you can take at home for handling frozen pipes without having to call a plumber though, and even better, you can prevent them altogether with some proactive measures. Don’t let winter catch you by surprise: make winterizing your pipes part of your regular routine each fall, and be sure to check on them regularly throughout the winter months for signs of trouble.

Pipes naturally hold some standing water as long as there’s pressure in the system, which you need to get the water running to your taps and appliances. However, that same water can become a liability when the temperatures slip below freezing. When water freezes, the molecules form a crystalline lattice structure which causes it to expand, which is bad news inside a pipe, because the expanding water can actually cause the pipe to burst. You probably won’t notice until temperatures thaw and your pipes start leaking or gushing water, and they could cause thousands of dollars in damage.

There are some measures you can take to prevent the need for emergency frozen pipes help in the middle of the night (or at any other time!). Start by insulating your pipes very well, especially if they are exposed (some examples include standpipes in the yard, as well as pipes in crawlspaces under the house). Specially designed insulation is available to wrap around your pipes, and you can fasten it with thermal tape for added protection. Even if you live somewhere that doesn’t get very cold, consider insulating your pipes in case of unexpected cold weather.

When the forecast is close to freezing, make sure your home is heated well both during the day and at night. Sudden temperature changes, as often seen at night, are often responsible for burst pipes, and leaving the heat on can keep temperatures stable enough to prevent frozen pipes. Use fans and open the cupboards for air circulation; while you may lose some heat this way, it will help keep pipes on the outside of the house above freezing temperatures. You can also drain pools, outside hoses, and other standalone systems outdoors which tend to be especially prone to freezing because of their exposure, and this is recommended for cold winters. Allowing water to trickle through the pipes can help as well, because the movement will limit the chance of freezing.

For people preparing to go on trips, draining the whole house’s pipes is an option to prevent freezing. Be aware that this will also deactivate water-based fire suppression systems, however!

If your pipes have frozen, don’t panic. A hairdryer or heat lamp can be used to thaw the water inside (make sure to open the tap for release), and you can assess the level of damage. If the pipes are leaking, turn off the main supply, isolate the leak, and either call your local plumbers or replace the damaged section of pipe yourself. If freezing becomes a recurrent problem for a given length of pipe, you may want to consider relocating it to a warmer spot or boosting the insulation around it.