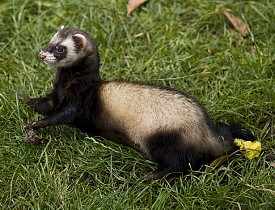 Perhaps you’ve had a similar experience as Renee Mendez of Sunderland, MA. One day she saw a ferret’s little head popping out of someone’s backpack and thought, "Wow, they’re really cute. I want one of those." However, Mendez found that her ferret had a strong smell that hit her as soon as she walked into the house.

If you too are dealing with odoriferous ferrets, don’t despair. Read what two ferret care experts have to say about coping with ferret odors.

The Connection between Ferret Diet and Odor

Donna Spirito, director of The Educated Ferret Association, explains, "What goes into a ferret comes out. If you feed them wrong, they will be more likely to smell."

The American Ferret Association adds, "Ferrets are strict carnivores; they require diets based on highly digestible animal (meat) protein with little to no carbohydrates. Selection of foods will have an impact on odor. Do not choose foods with ingredients such as fish, grains, fruits or vegetables. Do choose high quality ferret or cat/kitten foods sold by pet shops, feed stores, and veterinarians with at least 36% protein, that is moderate in fats (approximately 20%) and low in carbohydrates."

Spirito, who also operates a ferret rescue, says that after removing the meat, she blends all that’s left -- organs, skin, bones, etc. -- to make a "soup" for her ferrets. She does not recommend dried food for ferrets, except one brand that has a high percentage of meat, Totally Ferret. Spirito advises that "all-natural chicken wings and frozen mice" are also good foods for a ferret.

Spirito mentions that ferrets instinctively relieve themselves in corners as protection, so they will be less vulnerable to hunters. "You choose the place. We have two spots for our ferrets, not near food," says Spirito. She warns never to use pine shavings for ferrets as they are a health hazard for them and suggests shredded newspaper, changed at least daily, instead. Ferrets will quickly realize the appropriate place to potty, similar to cats.

"A ferret’s cage and play areas should include plenty of soft bedding, safe toys, and litter boxes filled with paper-based or wood-based pellet form litter. (Sawdust from your local carpenter won't cut it.) There is a good reason why many ferret litter boxes are corner-shaped … they tend to go in corners! So, plan accordingly to prevent accidents. The type of litter used will have a big impact on odor. Litters that produce dust or are highly scented are not recommended! Ferrets have short digestive tracts and fast metabolisms which dictate that they must eat often… and thus will also poop and pee often. Frequent cleaning of the litter box will make an enormous difference in ferret odors," states the American Ferret Association.

The American Ferret Association tells us, "A factor in controlling ferret odors is toy selection. Ferrets need a MINIMUM of 4 hours per day out of their cage, at least 2 of which should include human interaction. Choosing toys that are safe but readily cleaned is important. Do not give ferrets toys made of rubber or with loose pieces of string or leather (for example, the tail on an animal-shaped toy). Be careful with toys that have bells or squeakers that could be chewed loose and swallowed. All of these types of toys can cause problems such as an intestinal blockage. Toys made of harder plastic are excellent because they do not pose health hazards and can be easily washed. Fabric toys should also be selected for safety and should be washable. Toys can be frequently cleaned and swapped out to control odor, but also to provide enrichment for the ferret."

Spirito and Mendez agree that it may be best to have a room designated for the ferret or otherwise use barriers such as half-doors and gates to keep them corralled. Also it is best to have the ferret area uncarpeted as they tend to be "diggers” and will damage carpeting.

The American Ferret Association elaborates, "First, consider the flooring. Sheet vinyl (linoleum) or vinyl planks with overlapping flanges or 'click locks' are easy to clean and prevent urine from seeping into the sub floor. Laminate floors or hardwood floors are the next best choice but may be damaged by spilled water bottles or urine. Carpet is the least desirable surface as it will absorb accidents and also retain odors. If carpet is present, laying sheet vinyl over it will help with odor control. This can be cut to fit corners and moldings. Another protective material that is inexpensive and easy to cut to fit is the plastic carpet runners intended for stairs and hallways."

Cleaning Ferrets and Their Habitats

According to the American Ferret Association, "Ferrets naturally have a light, musky odor. This scent is produced by oils in the skin and the odor is greatly minimized when the animal is spayed or neutered. Ferrets also have scent glands which release scent as a defense. The American Ferret Association strongly opposes the practice of descenting of ferrets, unless medically necessary, as it will not reduce a ferret's natural scent.

"Frequent bathing is not recommended. This will in fact have the opposite effect to the one desired, since the ferret's skin will produce more oils to replenish what was lost in the bath. Baths may be given no more than once per month and as infrequent as every few months. Be sure to use a very mild shampoo, like one manufactured especially for ferrets. Regular ear cleaning may also help with a ferret’s odor.

"Owners who may find their ferret’s scent stronger than usual can easily alleviate the problem by replacing the ferret’s bedding (hammock, sleep sacks, washable toys, etc.) with clean bedding and toys. Scented laundry detergents or dryer sheets may be used when laundering your ferret’s belongings but keep an eye out as in rare cases this may cause irritation for some ferrets. Overall, clean bedding and a healthy diet are the best ways to minimize a ferret's odor. In addition to regularly washing your ferret’s bedding and belongings, creating a ferret proof environment that is planned for their habits and behaviors will make a big difference."

The American Ferret Association also notes, "The products used to clean a ferret’s space should be carefully chosen. A wide variety of products are available that are made specifically for cage cleaning, hard floor surface cleaning and carpet cleaning. Never use powdered carpet cleaners that are sprinkled down and vacuumed up. Airborne deodorizers are also a no-no, but solid-type odor eliminators kept well out of reach of the ferrets can be used. When selecting cleansers or deodorizing products, those with natural ingredients are the best choice for a ferret."

Spirito describes ferrets as extremely active animals, which will likely get into your trash, so it is best to have a child lock on the trashcan or keep garbage where the ferret can’t get at it.

Keep toilet lids closed. Spirito tells a story about one ferret who liked to get into the toilet and empty all the water out by getting wet and shaking.

Also, your ferret will love you so much they will often end up in any laundry or clothing lying about. "It’s a good idea to leave a shirt or other clothing item in their cage with them," declares Spirito.

Spirito is happy to answer questions about ferret care by email: educatedferret@aol.com.

PROMOTE - To promote the domestic ferret as a companion animal through public education via shows, newsletters, legislative education, and other venues.

PROTECT - To protect the domestic ferret against anti-ferret legislation, mistreatment, unsound breeding practices and overpopulation, needless scientific research, and any practice deemed to lower the health standards or survivability of the animal.