How Much Does a New Electrical Panel Cost? 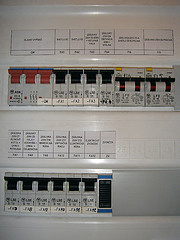 Electrical panels have an amp capacity which is the total electrical usage the panel can handle. The capacity can be 100, 150, 200 or 400 amps. Depending on your electrical needs, you may want to upgrade an existing panel or install a completely new one.

Does a tripped breaker mean I need a new electrical panel?

Many people believe their circuit breaker or electrical panel is faulty because they experience a tripped breaker. Often, this is not the case. A breaker’s purpose is to protect the electrical circuits from damage caused by an overload or short circuit. When these occur, the circuit discontinues electrical flow, but the circuit breaker can be reset, either manually or automatically.

To examine your electrical devices, with the breaker off, reconnect a single device. Once connected, turn on the breaker. If the circuit trips again, you have identified a faulty device and it should be examined by a professional.

Often large appliances, such as air conditioners, trip a circuit when being operated simultaneously with other appliances, and a professional HVAC contractor may need to be called in to reroute the air conditioner to a different circuit.