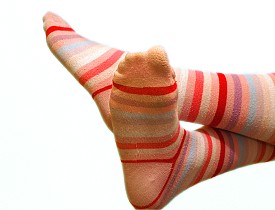 Admit it. Sometimes your feet smell. It's OK. We won't tell anyone. You don't even have to be seen buying foot odor products at the drugstore or supermarket. The remedy is probably in your pantry - or maybe the liquor cabinet.

To help you discreetly deal with the problem, I put six home foot odor remedies to the test. I tested these remedies on my sweaty feet following a couple hours of hiking, running or biking in sockless shoes. Granted, these simple tricks may not suffice after a week of backpacking or other extreme conditions. But they certainly offered me some relief for everyday odors.

You shouldn't look for the answers to all your problems in the bottom of a bottle, but in this case, a little hard liquor can help. Prevention magazine advocates wiping down stinky feet with a vodka-infused washcloth. Rubbing alcohol is fine, too. The alcohol is an antiseptic, and cools and dries the feet as it evaporates. It worked quickly and effectively, and it really cooled my feet down. In addition, it's a great option if you need a quick cleanup and don't have access to water, but can spare some vodka (we won't judge).

The "the cure is worse than the disease" remedy: Apple cider vinegar foot bath

The Livestrong folks recommend soaking the feet for 20 minutes in two parts water and one part vinegar. They said the Mayo Clinic swears by this remedy for odor and fungus. Woman's Day magazine is in favor of apple cider vinegar specifically, based on the recommendation of a New York City podiatrist.

Sure, my foot odor was gone after the vinegar footbath, but it was replaced by the overwhelming smell of vinegar, which required vigorous rinsing. Moreover, 20 minutes of vinegar wafting up from the feet is less than soothing. However, the Livestrong folks warn that the vinegar may dry out the feet too much over time, and cause irritation.

Another suggestion from Woman's Day is dipping smelly feet in a tea bath. Like vinegar, tannins in tea may help reduce perspiration, and thus foot odors. Notably, the drying effect is less powerful with tea than with vinegar, so it should be safer for daily use. The tea bath smelled better and was more soothing than the vinegar bath (particularly since I used spiced black tea), too. Also, my feet smelled much better after the tea soak. However, the tea stained my feet, which required a follow-up soap-and-water foot bath.

The "maybe it's the placebo effect" remedy: Baking soda

Another option is a warm baking soda footbath. HowStuffWorks proposes adding two tablespoons of baking soda to warm water, then soaking the feet. Once the powder dissolved, it felt like a simple water bath. Likewise, my foot stench was gone, but it was hard to tell if it was any more effective than washing with soap and water.

It may be more effective to use baking soda to de-stink shoes rather than feet. Try deodorizing shoes by sprinkling some sodium bicarbonate (the fancy scientific name for the stuff) into shoes. HowStuffWorks suggests mixing the baking soda with sage leaves to freshen shoes.

For a fourth footbath option, HowStuffWorks recommends adding table salt to warm water. I'm mot sure if I was subconsciously imagining a beach vacation, but this felt very comforting, relaxing - oh, and effective. My feet smelled and felt very refreshed after the salty footbath. And yes, science nerds, I know that baking soda is also a salt and I have no scientific basis for my distinction, but sodium chloride just seemed more effective than sodium bicarbonate.

The "prevention is the best cure" remedy: Corn starch

Last, Woman's Day advises sprinkling cornstarch into shoes to fight odors and absorb moisture. My feet certainly felt more comfortable and dry with cornstarch on their soles. I don't have a calibrated "smell-o-meter" to confirm a difference in odor, but I believe the smell was lessened. The cornstarch is also softer than baking soda, taking the comfort level a notch higher.