Help! My Deck is Collapsing! 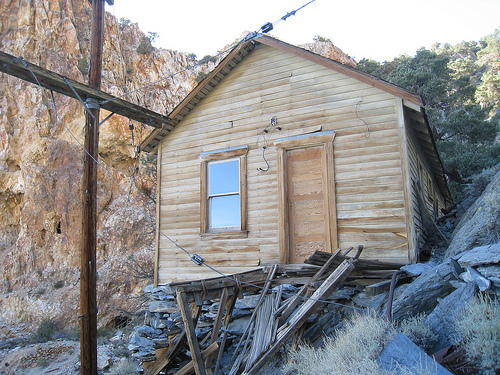 A deck collapse, in most contexts, means the deck platform is heading earthward. If this is the case with your elevated deck, how soon should you deal with the problem? That’s a rhetorical question, of course, because the answer is "now." Do not set a foot on a deck with obvious structural problems, no matter how girlish your figure may be. A deck can easily collapse under its own weight, let alone the additional poundage of a foolhardy sunbather or barbecue addict. And here's some more good news: If your deck is collapsing, you'll probably need an entirely new one because chances are it's either too old or was built improperly to begin with. Or both.

Why Decks Collapse
A standard attached, elevated deck has a few main structural elements that keep the platform aloft: The ledger is the horizontal board that joins the deck to the house wall. This is an absolutely critical structural connection and one of the most common places where deck failures occur. In the old days, some builders simply nailed ledgers to the wall, but nails can, and do, pull out. Ledgers must be fastened with bolts or lag screws (or specialty hardware), and they must be anchored to the house framing, not just the wall sheathing. Also, if the house has brick or stone veneer, that veneer itself doesn't count as a structural connection for the ledger.

The posts are the structural columns supporting the non-house side of the deck. These must be plumb (straight up and down), spaced properly, of the appropriate size and material, anchored correctly at both ends, and in good condition. Posts are supported below by poured concrete footings, or piers, that extend below the frost line (depth to which the ground freezes in winter). Non-frost-protected footings, such as concrete deck blocks, are not suitable for attached decks. The beam (or beams) lie atop the posts and support the joists (running perpendicular to the beam) that support the decking boards. Requirements for post-to-beam connections have changed over the years; if your deck is collapsing due to a beam failure, it may have been built to code at the time, but there are good reasons they've changed the code rules. Joist problems can lead to a spongy or sunken deck surface but are less likely to cause a collapse. However, joists that are simply nailed or screwed to the face of a ledger or beam can drop down or out completely. That's why someone invented the joist hanger (just Google it).

Getting Your Deck Fixed or Rebuilt
It'll take a professional's eye to determine the severity of your deck problems. And again, chances are you'll be replacing it. But if you want to have your deck checked out by a disinterested party before searching for a builder, you can look for a pro who understands deck construction but isn't in the business of fixing or building them, such as a residential architect, structural engineer, or home inspector, or you can talk to an experienced builder or carpenter who won't be bidding on the job. When it's time to hire a pro for the rebuilding, go with someone local who's on the books; that is, someone who's licensed and insured and has plenty of references whom you can call for testimonials. And always get a permit for the job. This ensures the local building department will inspect the work and approve the deck before you use it—or pay the contractor.

Here's another reason to consider: If you try to sneak under the system's radar and build the deck without a permit, then something goes wrong with the deck and someone gets injured, who do you think will be left holding the bag, you or the builder? If you guessed the builder, try again. He'll be mysteriously hard to reach when the lawyers come calling.

For more information on deck safety and what to do if your deck is collapsing, visit the website of the North American Deck and Railing Association (NADRA).