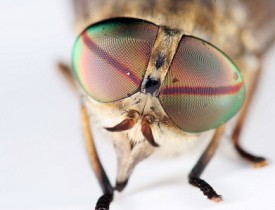 One of the biggest pests to humans is also one of the smallest: flies. They dart around the room, knock and buzz at windows and lights, walk all over our food and persistently land on the same spot despite being shooed away. But pick up a flyswatter and they disappear.

Why Flies are Dangerous to Humans

Flying insects are a nuisance for sure, but more than that, they are bearers of disease. In North America alone, there are 16,000 types of flies. Some of them eat by vomiting on their food to break it down, some of them eat or lay eggs in dead animals, some of them are bloodsuckers, most love an open garbage can... and they carry whatever pathogens they pick up along the way on their hairy legs and in their mouths. So when they land on your arm (or your fork), they pass these pathogens on to you.

Here are a number of common types of flies in North America and some of the diseases they carry: 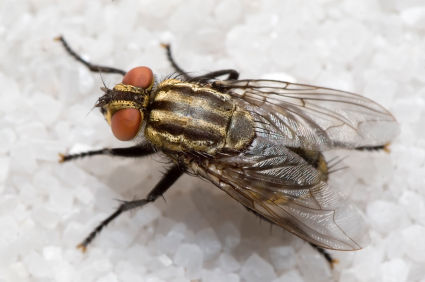 You can recognize the housefly by its grayish color. Found all over the world, it can carry salmonella, staphylococcus and E. Coli, and cause diseases such as typhoid fever, cholera, hepatitis, polio, tuberculosis and dysentery. These flies don't bite, but they ingest food by vomiting on it to start breaking it down. Then they sponge it up with their mouths. Their diet includes organic scraps in the garbage, exposed food in the home, carcasses and excrement. Pet excrement in the yard is a popular breeding ground for houseflies, as are dirty trash cans. 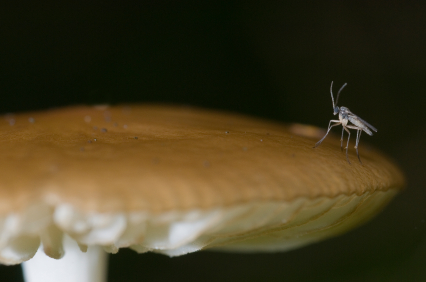 Gnat is a collective term for various little flies that live throughout North America (and beyond). Gnats are sometimes called midges or no-seeums. A gnat is most likely to bite in the evening. The males swarm at dusk in a group called a "ghost," in search of mates. Most gnats bite. Like the mosquito, female gnats need blood to produce eggs. Also like mosquitoes, gnats lay eggs in standing water. Gnats carry parasites and bacteria that can cause conjunctivitis (pink eye). 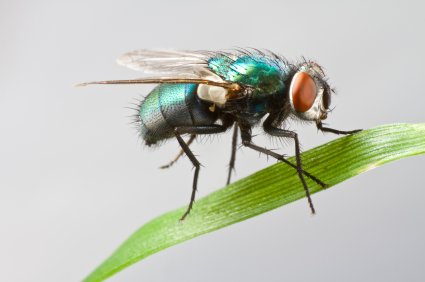 Blow flies are a cool metallic blue or green color and a bit larger than houseflies. They are located throughout North America, but they are especially prevalent in the Southwest. Blow flies feed on decaying meat and organic matter. Their habitat is often around dumpsters. The blow fly prefers fresh meat and is often the first visitor to a new carcass, where it lays its eggs, which quickly hatch into maggots (larvae). For this reason, maggots can be used by forensic experts to establish time of death. Blow flies also lay eggs in wounds and have been used medicinally to clean wounds. They can transfer bacteria that cause dysentery, typhus and cholera. As their name suggests, fruit flies are found near ripe or fermenting produce, where they lay eggs. Fruit flies are common in homes, restaurants and supermarkets, and anywhere else food is served. They can also make their way inside from your garden. Fruit flies are potential disease carriers, but more commonly they will cause stomach upset and diarrhea if the larvae are accidentally eaten. Populations are at their greatest near harvest. 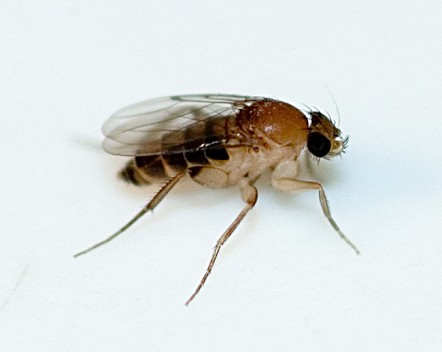 If you approach a tiny fly that looks a little humpbacked and it runs away from you rather than immediately flying, it's a phorid fly. In nature, it can be found around a lot of rotting vegetation and dead animals, but it also makes its habitat near drains, trash cans, grease traps, crawlspaces and just about any place where there is something rotting. Because it breeds and feeds in such unsanitary conditions, it can spread disease. 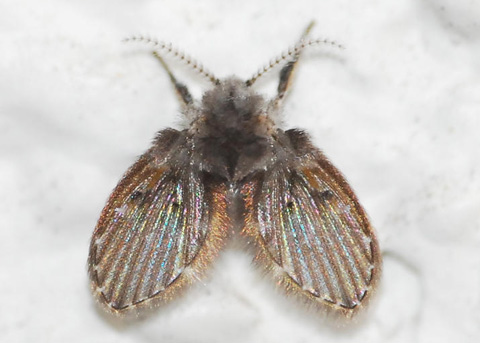 A drain fly is small like a gnat and covered with a lot of hair, so it has a fuzzy appearance. If crushed, it leaves a powdery smudge. Drain flies breed in drains, sewers, septic tanks and soil that is contaminated with sewage. In the home, drain flies might spend the day resting on the side of the tub or shower and in the evening they can be seen hovering around sinks. While they don't tend to spread disease, they can cause bronchial asthma when people breathe in dust from dead flies. This happens as a result of a major infestation. 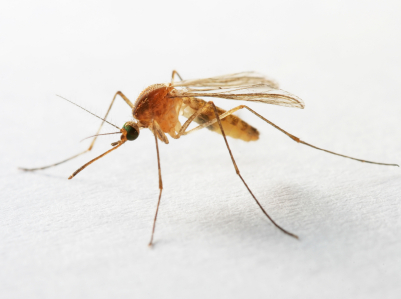 Mosquitoes are one of the most notorious types of fly. There are 200 species of mosquito located across North America. Bites cause swelling and itching on sensitive skin and they carry potentially deadly diseases such as malaria, West Nile encephalitis, yellow fever and dengue fever. Mosquitoes tend to live around water, but they don't need a lot of it to survive. They lay eggs in standing water and aren't very selective about location. A Frisbee with a quarter-inch of water in it will do. Mosquitoes don't really eat blood: The females use the protein that they get from blood to produce eggs.

Flies Have a Few Good Qualities But ...

In defense of the fly, I'd like to point out some good qualities: many are super pollinators, they help break down organic material and they control other insect pests. But since flies are so prolific and because they carry so many diseases, there is no reason not to control them around your family and home. The buzzing alone is enough to drive you nuts.

How to Get Rid of Flies

The good news is that controlling flies in your home is pretty easy. It's called exclusion, and its effective for all types of flies. Don't offer them anything they want (rotting  or fresh meat, ripe or rotting produce, sugary foods and drinks, standing water) or allow them easy access via open doors and windows and holes in screens. In the yard, be sure there is no standing water. Keep swimming pools, ponds and fountains clean and aerated. If you have a bird bath, change the water and clean the basin often. Also, clean up after your pet each time. Yes, flies eat that too!

For professional help getting rid of flies, contact a pest control expert.