Building Your Own Bamboo Bike Trailer 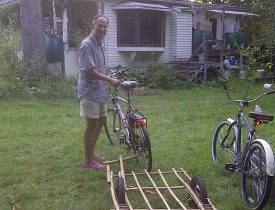 Gabor Lukacs of Amherst, MA believes we can go beyond sustainability to a place of “resilience.” Part of Lukacs response to the effects of global problems relating to the use of petroleum, is to only use bicycles for transportation. “I want to live my life without using cars,” said Lukacs.

However, you can only carry so much on a bicycle – or can you? Lukacs started to build a variety of bike trailers to meet his needs. He also realized he could use (primarily) bamboo and nylon string to build a bike trailer for about $15. Lukacs initially purchased and used metal bike trailers (around $500 for larger or more elaborate trailers) as design models as well as normal use. He experimented with building a series of bike trailers made of differing materials and learned to weld along the way. However, bamboo as the primary structural material started to make the most sense. “I grow bamboo and I thought ‘Well I can do this,’” said Lukacs. (Although Lukacs grows bamboo, and it works for him, we need to warn you that there are compelling reasons not to grow bamboo in your yard.)

Lukacs found such success with his bamboo bike trailers; he began teaching local workshops on how to construct your own. “I had ten students sign up and twelve actually showed up,” he said.

“Bamboo is actually stronger than steel. One of its primary constituents is silica, which is basically glass which is harder than steel,” said Lukacs. Bamboo is tough and requires either a strong lopper tool or a metal saw to cut. Once you have your stripped (of leaves) bamboo you can begin to design your bike trailer and cut appropriate sized lengths. Some parts of the trailer are more easily put together with bolts. Pre-drilling is a good idea due to the nature of bamboo to be both tough and prone to splitting.

The design of your bamboo bike trailer will depend on what you want to carry and use it for. For example, Lukacs has several, one for groceries, one for carrying larger items such a lumber, and a very long trailer for carting his canoe. The design is essentially a square or rectangular structure that is cross-hatched, has two wheel wheels, and an arm with a latching mechanism for your bike. It is a simple structure and can primarily be held together with nylon or other non-shredding string. When tying off all the parts, you have to be sure to make the tie-off extremely tightly. The string is wrapped three to four times for each tie-off and knotted three times. Lukacs also suggested a drop of glue on all your knots for extra hold.

You will need to find two wheels the same size. Lukacs said that it is best to have the trailer be as close to the ground as possible for stability. You will need two metal plates to hold the wheel axles and a latching device. Lukacs said that he has sometimes scrounged latching devices from old rider mowers, but that they can be purchased for $3 to $7. The latching mechanism is simply a metal arm with holes on both ends and pins to lock the arm to the trailer and bike.

Part of the design process is determining how large a trailer you are comfortable pulling in traffic as well as how strong a rider you are. A well-made bamboo bike trailer can easily haul up to 450 pounds, but in general most are made to haul about 75 pounds. The more metal used in construction will add weight to the trailer – which you will be hauling. “Too much metal can make it two times as heavy,” said Lukacs.

Lukacs said that once your materials are gathered, the trailer can be built, even by a novice in two to three days. You can research your own designs, but more information about cargo hauling on a bicycle can be found at Transition Amherst.

“The more visible and the more strange you are (when riding in traffic) the better,” said Lukacs. He added that it is a good idea to spend plenty of time practicing before heading out to the open roads, especially practicing on hills, steep driveways, and over bumps. “If you are nervous and your outside wheel goes off the road, you may crash,” he said.

Lukacs also warned that you need to be sure your cargo is well balanced on the trailer and firmly tied down. “Otherwise, you may have items moving forward into your rear bicycle wheel,” he said. Lukacs added that having a mirror on your bicycle doesn’t tend to help with hauling a trailer as the trailer is very close to the bike and mirrors are usually set up to see approaching traffic.

For more information about bamboo, visit the American Bamboo Society.

Cris Carl writes about Boston-area carpenters and remodeling for Networx.