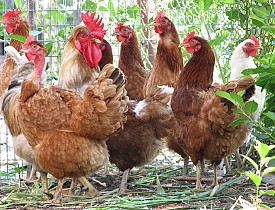 Building a backyard chicken coop is one of the best investments you'll ever make. Not only will it allow you to produce fresh, self-sustaining organic eggs everyday, but the chickens will eat your food scraps as well. It's a great way to incorporate permaculture design into your landscape.

Chicken manure is also one of the best fertilizers in your garden. Use it to grow bigger vegetables, lusher plants and brighter, more vibrant plants.

First, start the process by making sure your town allows chickens. If you live in a rural area or county, raising chickens in your backyard probably won't be a problem. Even cities like New York City, Chicago, Memphis, Portland, and Seattle allow laying hens, so don't be afraid to ask.

The next step is designating space for the chickens and building a chicken coop. The general rule of thumb is allotting about 2-3 square feet per chicken inside the henhouse and 4-5 sq/ft per chicken in an outside run.

Once the area is marked off, it's time to build the actual chicken coop. These structures come in all shapes and sizes with an abundance of building plans available online, as well as many pre-fabricated options as well.

However, you can also get started with a simple doghouse by raising it up on cinder blocks, adding a roost about a foot off the floor and layer the bottom with straw or pine shavings for nests. You'll also want a way to access the eggs, so consider hinging part of the roof, or building a window.

After the coop is built, you'll need to construct a pen or run for the chickens so they can run loose and feed off of the worms, bugs, and minerals on the dirt. This pen will also keep out unwanted predators.

However, your chicken run design will depend on what type of chickens you keep. Start by consulting the breed selector on My Pet Chicken to see which birds suit you best.

Keep in mind that heavy and large chickens are less likely to fly away so your chicken pen design will simply consist of wooden posts and some chicken wire or fencing.

On the other hand, if your chicken flock varies in size including smaller chickens that can fly over fences, you'll need to construct a pen with closed in wired or netted roof. If in doubt, err on the side of caution and enclose the pen.

The chickens will also need a feeder as well as a fresh water source set up in their coop. Also, the coop will need to be lined with straw or pine shavings for bedding.

As for food, stock up on all natural feed and let your neighbors know they're on their way. Chickens are natural garbage disposals, so turn your compost bucket into food scraps for the chickens, including vegetables and bread to supply as treats and supplemental nourishment.

Whether you buy your chicks online or at your local feed store, prepare for the first 30 days with your new chicks by constructing a young chick brooder in your garage or other enclosed and protected area.

Using something as simple as a sturdy cardboard box or a small animal cage, line the floor with pine shavings and set up a 100 watt bulb pointed one corner to create an area that's about 90 to 100 degrees for the first week. You'll then decrease the temperature 5 degrees per week for two months, or until they grow their feathers.

Once feathered out you'll want to move your adult hens in their new coop. It's best to move the birds at night if possible, as they will generally be calmer and will go right to sleep in their new place and wake up in the morning already feeling at home.

A typical hen will start to lay eggs at about 6 months of age. The eggs will start out small, then get increasingly larger. During the first year of laying, the hen (if she is a good egg producer) will lay one egg, almost every day.

Note that during the bird's lifetime--typically in 2 to 5 years--they will stop laying in the late fall/ winter months and start again in the early spring. However, you can encourage egg laying through the colder months by keeping a light on, inside the chicken coop.