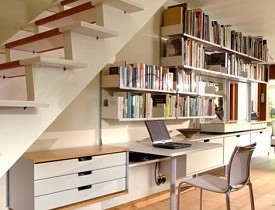 If you are short on storage space, why not make use of the space under your stairs? Many houses with two or more stories have space under the staircase that is underutilized. Space under the stairs in an unfinished part of the house like a basement is easily organized by installing open shelving, but more often than not, this option is overlooked and the space becomes a jumble of boxes and cobwebs.

Until recently, what the average builder incorporated into the space under the stairs in a finished part of a new house was a door leading to an awkward triangular closet. Anything deep in the interior of such a closet rarely, if ever, saw the light of day again.

Utilizing storage cabinetry under the stairs is traditional in Japan, and similar storage systems have developed in England and Europe, where smaller-scale housing has been built for many years, much of it dating from before people had as much to store as they now do. Americans who find themselves in the same predicament have taken some inspiration from overseas, and there are now companies whose sole business is optimizing under-the-stairs storage space.

The most effective use of space

The most effective arrangement is a combination of drawers and cabinet space that is accessed from the side of the stairs. The doors or drawer fronts of the cabinetry are constructed so as to compliment the décor of the adjacent wall, as well as the rest of the house, and to conform to the slope of the staircase.

Some of the designs feature space for hanging coats, and rolling storage bins that allow for independent access to the items from more than one side. Each storage system is highly personalized, depending on what sizes and types of items are to be stored, and how much flexibility the owners want built into the system. When you hire a carpenter to take care of this project, ask for his suggestions on how to customize the space for your family.

Since new housing with under-the-stairs storage as a standard option is just starting to be built in this country, most systems that are installed today are retrofitted. This may entail some major, if localized, renovation, including reframing and electrical or other mechanical system rerouting. The complex and expensive nature of this kind of work has kept under-the-stairs storage in the high-end remodeling category, and has significantly slowed its introduction and acceptance.

Similar to other casework in a house, such as kitchen and vanity cabinetry and living room built-ins, under-the-stair storage can be worth a lot more than the money you put into it in terms of making your house more livable and convenient. Also, it has a positive effect on how your house "shows" when you eventually put the property up for sale, which makes it a good investment. You're likely to be seeing a lot more of this amenity in the future.