BPA-Free Plastics May Not Be Safe 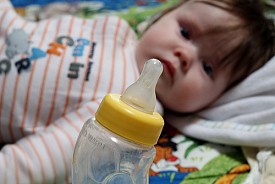 In 2008, the news burst on the media everywhere: common plastics contained potentially dangerous levels of bisphenol a (BPA) an additive that could be hazardous to consumer health. It leached into food and drinks, especially when plastics were warmed, posing a risk in baby bottles, water bottles, plastic storage containers, and more. The plastics industry was reluctant to face the truth on BPA, but under pressure, it gave in -- now, many plastic products are proudly labeled BPA-free.

So that means you're safe, right? Your plastics have been guaranteed free of the nasty chemical everyone was so worried about, and you can go back to business as usual.

Not so fast. An environmental researcher in Oakland, California got concerned. He wasn't totally convinced that even BPA-free plastics were safe, and his worries were spurred by his daughter's demands for her plastic sippy cup. He'd tried to get her to use a stainless steel one, but she was having none of it, so Michael Green sent her cup, and samples from a variety of locations, to an independent facility for testing.

What he found shocked him: these products exhibited high levels of estrogenic activity, which is not good news. Exposure to excessive estrogen can be a factor in the development of breast cancer. More troubling still, they passively leached estrogen-like chemicals even without being heated or stressed, and the lab's results showed that the chemicals released were, at times, even more potent than BPA.

Meanwhile, manufacturers sued to prevent the release of the study, knowing that it might upset profits. While big tobacco is infamous in the United States, big plastic has its own large lobby and significant incentive -- to the tune of billions a year -- to suppress information regarding the potential physical and environmental harms associated with plastics. This study shows that even plastics marketed as "safe" may contain risks for consumers, and raises the risk of lawsuits as people discover that the products they relied on carried secret dangers.

The implications of this study could be huge. More and more consumers are already turning to glass and metal containers out of concerns about harmful chemicals found in plastics, and these numbers may increase in the wake of this information, as consumers may be reluctant to trust the plastics industry again even if it reformulates its products to address the issue. The growing consumer concerns about harmful chemicals in ordinary products explain why painters are doing a brisk business in no and low-VOC paints, why furniture companies are under pressure to take flame-retardant chemicals out of their products, and more.

As the plastics study illustrates, harmful chemicals can be hiding everywhere, even when you think you're in a safe environment. Consumers count on people like environmental regulators to conduct unbiased testing to confirm the safety of new products on the market, and if this job isn't being performed to satisfaction, it raises concerns about what else is lurking under your Cleveland flooring or inside your Miami refrigerator.