Birds and Bats: Helpful or Harmful? 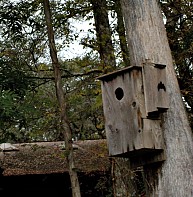 Bats and birds have a complex relationship with us human beings. There are many ways that these animals benefit us. However, they have been implicated in the spread of several dangerous diseases and parasites. Here is the good news … and the bad.

Seventy percent of bats are insectivores, eating an incredible 600-2000 insects per hour. They are extremely beneficial to humans in terms of insect control -- especially  mosquitos (which may carry West Nile fever) and rootworms (dangerous to agricultural crops). Not only do bats save farmers from spending billions of dollars on pesticides every year, they also limit the amount of toxic chemicals that are released into the air.

Of the remaining 30 percent of the bat population, most are frugivores. This means that their foods are fruit, flower nectar, and pollen. In fact, these bats help humans in two other ways, by pollinating fruit-bearing plants and by spreading plant seeds.

Contrary to popular misconception, only a handful of bat species actually consume blood, livestock blood in one case and bird blood in the rest. They do not kill their source of supply, either, but rather simply drink about an ounce at one "meal."

The flip side is that bats may carry disease -- approximately 5 percent of bats have rabies, which is dangerous and life-threatening. Although these creatures won't ordinarily bite humans unless provoked, anyone who does get bitten by a bat should be examined by a doctor immediately. Be especially wary of a bat that appears to be sick or injured; do not touch it, but consult your local animal control office for assistance.

Another disease which is associated with bats is histoplasmosis. Infected bats excrete histoplasmosis capsulation fungus in their guano. Inhaling the fungus' spores from large amounts of guano can cause illness, which starts in the lungs. It may progress to flu-like symptoms, and serious or even fatal illness in a small number of cases. The demographic groups most susceptible to histoplasmosis are the immune compromised, heavy smokers, the elderly, and infants.

Why do human beings love birds? Let us count the ways. Like bats, birds are invaluable in controlling unwanted insects and larvae, pollination, and seed dispersal. However, birds are also treasured for their physical qualities -- the beauty of their songs, the splendor of their coloration, and the grace of their flight.

In addition, birds such as macaws, canaries, and budgerigars can develop communicative and even affectionate relationships with humans.

Pest birds produce excrement that is not just unsightly -- think of a stately statue covered with pigeon droppings -- but also hazardous and even deadly in some cases, albeit rare. Only mammals can contract and spread rabies, so this is not a potential threat from birds, as it is from bats.

Nevertheless, birds are associated with a number of other health problems dangerous to humans. Histoplasmosis is one; however, unlike bat guano, only dried bird droppings may contain the hazardous spores. Other diseases include candidiasis, cryptococcosis, E. coli, St. Louis encephalitis, and salmonellosis. What's more birds can carry ectoparasites such as bed bugs and West Nile virus (yikes!).

If you have colonies of pest birds or bats -- or large amounts of their droppings -- on your premises, you would be wise to hire a professional and have them removed.