Beginning to Keep Goats at Home 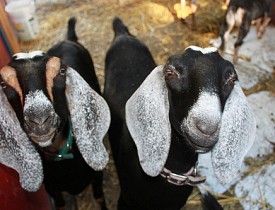 If you have room for goats, farmer Marty Johnson in Fort Bragg, California highly recommends them as a source of both milk and meat. This may not be an option for urban gardeners unless they have access to a lot nearby (although some folks do successfully raise goats in the city), but for those living in suburban and rural areas, goats can become part of a microlivestock operation. It’s also possible to join a milk share, where participants buy a share in an animal kept by a farmer offsite—this can be a good alternative for people who want fresh milk and a chance to visit “their” goat without having to handle day to day care.

Johnson’s goat of choice is the Nubian, which produces lots of high-quality milk with a high butterfat content. Their milk is also less likely to develop the strong, goaty flavor that some people find distasteful, and it performs well for both drinking and cheese making. She says to plan on getting two, “because goats are herd animals, and if you only have one, she’ll scream.”

I visited her farm to meet her goats, do some milking, and learn more about keeping goats on a small scale. Essential to a goat operation is a barn to shelter them at night—she has a 10 by 12 foot divided custom carpentry enclosure for her small herd, which includes four does and an assortment of kids at the moment—along with some grazing space. Goats love scrub and poor grass and don’t require high quality pasture like horses and cows do. Her goats graze on three quarters of an acre which she keeps in rotation.

In addition, Marty supplements with alfalfa, grain, and a goat feed formula to keep her goats strong and healthy. Thanks to the goat community in her area, she can take advantage of a wealth of knowledge from other goat handlers to handle most of her veterinary issues, including administering vaccinations, caring for minor health problems, and managing routine health issues along with labor and delivery in the spring. When she does need a vet, she calls on a large animal vet with training in goats.

She advises would-be goat keepers to check on permits regarding livestock, barns, and other structures before getting started, to make sure they don’t run afoul of any regulations. Resources from a local agricultural organization or permit office may be available to help people who are preparing to raise microlivestock. When choosing goats, people have a number of breeds to choose from, and it can be a good idea to connect with a local goat community before getting started. People raising goats in the area can help newbies pick out good starter animals, in addition to providing tips, tricks, and instruction in tasks like milking.

Goats, Johnson explains, like routine, and that includes controlling herd size. She breeds her goats annually to keep them in milk, using the resulting kids for meat and to replace the older generation of goats. Does are often traded in the goat community rather than being butchered, because they can become valuable sources of milk. For people just starting with goats, it may be possible to buy a doe already in milk to get started, and to get help with breeding in the fall.

To keep goats on an established schedule, Johnson feeds and milks at specific times, and in a specific order. Her does come out of their enclosure in order in the morning and load up in the milk stanchion on their own, and she makes sure to get them comfortable and sweet-talk them before she starts the milking. Milking involves squeezing and pushing down in a steady rhythm to encourage the doe to let down her milk, and it should be done into a clean container after wiping down the udder. It can take practice, and surprisingly more force than people might expect, but it’s quickly learned and can even be rather enjoyable.

One thing to watch out for while milking is hooves in the bucket, a problem any goat owner can sympathize with. Some does get impatient or restless, and attempt to kick the bucket over or spoil the milk by landing a hoof in it. For people who are just learning to milk, it can help to have someone at the doe’s head to distract her, and it’s important to keep an eye on any suspiciously restless feet.

Goats are a great source of milk as well as meat for people who aren’t ready, or willing, to handle cattle. It is important to be aware that goats are extremely intelligent and curious animals, which means they’re remarkably good at getting into trouble if they aren’t kept entertained and secured. A goat enclosure should have plenty of room with secure fences, along with some salt licks and environmental enrichment like toys to give the animals something to do. City Grazing, a San-Francisco weed control company, suggests using electric fences to contain goats. They install fences at sites around San Francisco before bringing their herd in to work due to goats' notorious ability to escape.

Repainting Our Kitchen Cabinets Was A Small Fix With Big Impact