Adaptor, Converter or Transformer? Which Do You Need? 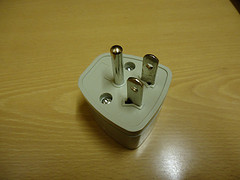 Even though today’s instant communication has made the globe seem smaller, there are still differences among various parts of the world. One difference you’ll notice when traveling is that not all countries have the same electrical system as the United States. Wall outlets may be unfamiliar sizes, while plugs might remind you of something from outer space. Whatever small appliances you tote along on your trip – or buy abroad and bring home – will need to be adapted to the appropriate electric system. The question is: What kind of tool will accomplish this? Should you be looking for an adaptor, converter, or a transformer?

Why Do You Need Them?

Although it’s generally recommended to travel light, every vacationer is likely to have one or two “must have” electrical items they want to take along. These might be for personal appearance – a hair dryer, travel iron (which can double as a sandwich toaster), or shaver. A surprising number of tourists opt to save money by doing their own food and beverage prep with the help of a portable slow cooker or coffee maker. Physical or mental health reasons might make packing a humidifier or white noise machine essential. And, of course, many folks can’t live without their electronics – a Smartphone charger, camera battery, and/or laptop. (Although handheld devices have rapidly made the laptop close to obsolete, journalists and those seeking to write the great American novel in Paris will find its full-size keyboard handy.) If they can’t be made compatible with the local electrical system, all of these will be useless to you.

Electrical potential is measured in terms of volts. In the US and most of the rest of the western hemisphere, the majority of electrical devices run on 110-120 volts, based on the model developed by Thomas Edison. The remainder of the world uses 220-240 volts, following another pioneer in the electrical field, Nicola Tesla. (Even Cleveland electricians, from Edison’s home state of Ohio, will tell you that the 220 volt system is more efficient, but at this point, it would be extremely complicated and expensive for America to change over.) To further complicate the story, some American-made appliances run on 220 volts … however, these operate on 2 phases of 110 volts, rather than the foreign standard of 1 phase of 220 volts.

Adaptor and Converters and Transformers! Oh My!

If your device can run on 220 volts, you’re in luck; all you will require is a simple plug adaptor, so that its plug can be fitted into the wall socket of your accommodations abroad. Even better, when you have several 110 volt items with you, is a power surge strip with a European plug.

For 110-volt only devices, you’ll have to have a converter, which will adjust the electrical flow from 220 volts by switching the current on and off at a rapid pace. It is only for electric items you’ll be using for just a few minutes. Converters cannot be used at all with electronic gadgets containing a computer chip – which need a transformer. This is also a requirement when you want to plug a 220-volt item purchased abroad into a 110-volt outlet back in the USA.

Brazil and South Africa use another of Edison’s inventions, direct current, or current that always flows in the same direction. However, the majority of countries use alternating current, which changes direction many times per second; this is more practical in that it allows electric companies to send power long distances at a high voltage and then reduce the voltage before transmitting the electricity to homes.

CAUTION: Never use a converter or transformer in a D/C country. They are designed for A/C only and can easily burn out an appliance if used with direct current.