A Guide to Safely Removing Snow from the Roof 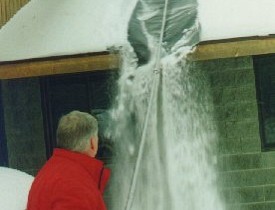 The two very best ways to hurt yourself while clearing snow from your roof are 1) falling off the ladder on your way up to the roof and 2) falling off the ladder on your way down from the roof. Of course, you can always just fall off the roof directly, preferably with a dramatic attempt to grab the gutter on your way over the edge. On the other hand, the two very best ways NOT to hurt yourself when clearing your roof are 1) using a roof rake and 2) hiring a roof cleaning professional (who hopefully is much more skilled at grabbing gutters than you are).

When to Clear a Roof

The weight of snowfall varies considerably, depending on how wet it is. And other factors also contribute to hazardous roof loads, such as ice buildup and snow compaction due to recent weather patterns. So there's no rule of thumb for when to clear your roof. Instead of making an uneducated guess, check with your local government office, city building department or news sources for recommendations. That said, don't ignore signs your roof is in danger of collapse. These include new cracks in ceiling surfaces, creaking or groaning sounds coming from the roof structure and doors and windows suddenly failing to open or close properly.

A roof rake is sort of like a snow shovel with a ridiculously long handle. But instead of picking up the snow like with a shovel, you drag the snow down and off the edge of the roof, in the manner of raking or using a garden hoe.

Roof rakes are safe because you use them from the ground. In fact, you should never use a roof rake from a ladder, for a couple of reasons. First, unless you're a tightrope walker, you're probably not familiar with balancing long poles while standing on small surfaces like a ladder rung. And second, when you pull the snow off the roof, it has no other place to go than straight down, right where you happen to be stuck standing on the ladder.

The downside of roof rakes is that most of them work only on single-story houses, and some are downright pricey (but they're still much cheaper than fixing a caved-in roof or even a bad roof leak from an overload of snow).

Rake designs vary. Some are little more than a pole with a metal plate at the business end; others have cool features like spikes for breaking up hardened snow or rollers for easy movement.

The fanciest version I've seen, the MinnSnowta Roof Razor, is actually a push (rather than a pull) device. It cuts into the snow, sending it off the roof via a slippery specially treated cloth runner. This saves you the effort of lifting the tool's head up and behind the snow. According to the manufacturer, the MinnSnowta Roof Razor "doesn't damage your roof as is the case with a lift, chop and pull type." They also claim the Roof Razor can be used on two-story houses, and offer various tools for different types of roofs and snow conditions.

If you've got cold feet about purchasing a prefab roof rake, here's a simple homemade version you might try. Bear in mind that I haven't actually built one of these, but this is the basic design I'd start with: Get the longest length of 1-1/2-inch or 2-inch PVC pipe you can find (1-inch is a little too flexible). Screw a PVC floor flange to a rectangular piece of 3/8-inch plywood, and then glue the pipe into the floor flange. Weight is an important consideration, so don't make the plywood head too large. Once you've field-tested and refined your own roof rake design, paint the plywood for a slick coating that resists clumping of snow and ice.

How to Use a Roof Rake

Each raking technique is specific to the rake design, but in general, the idea is to remove the bulk of the snow—not all of it. No need to scrape down to the shingles like you do with your front walkway. It's very common for homeowners to damage their roofing and gutters by striking and scraping snow and ice buildup with any variety of tools, including roof rakes.

The other general rule to follow is to remove the snow in a fairly systematic fashion. If the snow depth or weight is significant, be careful to remove the snow a little bit at a time from opposing roof planes. You don't want to unload one side entirely while the other side remains full of snow, creating a serious weight imbalance.

The safest and easiest way to remove excessive snow from your roof is to hire a roofing professional to do it. The service may cost well upwards of $100 per hour, but that's a lot less than emergency medical care. The availability of roofing companies that handle snow removal depends on your local climate. Even in Denver, where I live, there's no such thing as a full-time snow removal company for roofs. But in places like the Upper Midwest it's much more common.

According to Kyle Andersen at Advanced Exteriors, a large Denver roofing contractor, their pros have to set up an anchor point before getting on the roof. Sometimes this requires throwing a safety line over the roof's ridge and anchoring to it to a fixed object, like a truck, on the other side of the house. See why you don't want to do this yourself?

Andersen gets only a few calls a year to remove snow from existing roofs (i.e., not under construction), but his company does lots of work preventing snow accumulation problems. Installing ridge vents improves airflow under the roof deck, evening out the temperature on the roof to keep snow accumulation more even. Heat tape, or cables, snaked along the edges of the roof and laid inside gutters helps keep drifts, cornices, and ice dams from forming. In areas with significant snowfall, cornices can cause structural damage and present a general risk to people and objects below. The safest way to deal with roof snow, advises Andersen, is to prevent a hazardous situation in the first place.