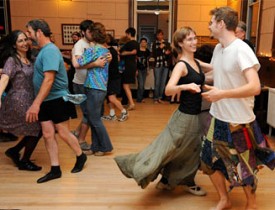 The Guiding Star Grange in Greenfield, Massachusetts has been going through renovations in recent years to “not just make the building energy efficient, but a successful place for the next generation,” said Dick Henry, previous Master of the Grange. Henry, 72, served as Master of the Grange from 1988 to 1997. He has worked consistently in varying roles over the years to raise funds and support the building’s improvements.

The 3,500 square-foot grange was built in 1932 – the first grange buildings built in Massachusetts.

Henry said that the renovations actually began taking place in 1992, when it was determined that the building and the community would benefit from handicap accessibility. Since that time, the building has undergone nearly a half-million dollars in renovations, paid for partly by loans and partly by vigorous fund-raising. 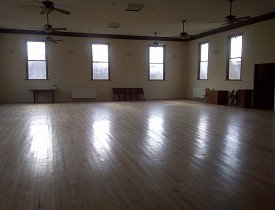 Besides typical ramps for building access, the entire back-end of the building was torn off and reconstructed to accommodate a three-floor lift. An additional lift was installed to gain access to the stage area, Henry said. In addition, they needed accessible bathrooms on each of the two primary floors for both men and women along with widening all doorways. “Grange members have tended to be older. Now here I am twenty-five years later walking with a cane,” said Henry.

Henry said the next consideration after making the building accessible was to “try to do anything we could to make the building energy efficient.” The Guiding Star Grange joined with over 400 households known as the Greenfield 10% in the challenge to reduce their energy use by at least ten percent. “We actually ended up reducing our energy usage by 15.5 percent,” said Henry.

To achieve greater energy efficiency, one of the first tasks was to replace the ceiling in the main hall (where the dances are held) and add ceiling fans. “Just as a result of the new ceiling we saved a lot of money in fuel oil,” said Henry. Walls were torn out and rebuilt with heavy insulation, a coat of primer, and two coats of paint. “The walls are pretty well air-tight now,” said Henry. The main hall also had a new air ventilation system as well as a new heating system installed.

The Grange has always had a kitchen which is used for fundraising ventures such as community suppers. However, the entire kitchen needed to be brought up to code for modern-day use. “We took the walls all the way out to the foundation,” said Henry. The kitchen and building has all new equipment including a convection oven, and upgraded electrical systems now as well. There is also a new hot air system to replace the hot water system of heating and a new Buderus hot water heater. New rooms and storage were created throughout the building, including a special “back stairway” that takes you onto the stage. Even the oil tank was moved indoors a few years ago into a newly created room. 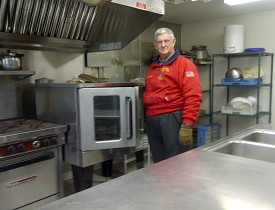 The rear of the building is now the main entrance to accommodate accessibility and the front of the building has been dubbed “the ceremonial entrance,” by the Massachusetts Architectural Design Board.

More projects are on the way to renovate the downstairs dining area as well as other improvements. Henry said that he wanted to make sure everything was done especially well with the money they raise. “I hope somebody will be using this space for the next fifty years or more,” he said.

Cris Carl writes for Networx. Get home & garden ideas like this on Networx.com.

New Cedar Fence Lets Our Dog Get His Exercise