A Beginner's Guide to Cool Roofs 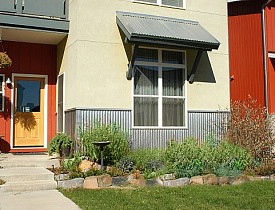 The concept of cool roofs is thrown around a lot these days.  US Energy Secretary Steven Chu suggested that painting roofs white, along with making paving more reflective, would reduce global warming as much as taking every car in the world off the road for 11 years.  Yes, he was being hyperbolic, but he does have a point.  Dark roofs absorb the sun's heat, and in hot climates, a lighter colored roof can cut down on the amount of air conditioning needed.  Light roofs also help reduce what is known as the urban heat island effect.  This happens in urban areas where dark roofs (and roads) absorb the sun’s heat during the day, releasing that heat back into the atmosphere later in the day as the air temperature starts to go down.  This reradiated heat offsets natural cooling in the evening, making cities hotter than they should be.

Before you climb up on your roof with a roller and a bucket of white paint, there are some things to think about.  First, although a Lawrence Berkeley National Lab study determined that you get between 10 and 50% annual cooling savings with a white roof, this is based on the average house.  In the average house, summer heat in the attic makes the living space warmer because the ceiling usually isn’t well insulated and air sealed.  When that same ceiling is done right – lots of insulation, really good air sealing, a tight attic access, and, most important, no HVAC system up there, the attic temperature has little, if any effect on the house temperature.

So, clearly there are other ways to save energy besides painting your roof white, but it will help keep the atmosphere cooler, particularly if lots of people in the area do it.  I’m not suggesting that you should actually paint your roof white, but when you’re going to replace your roof or build a new house, it’s worth putting on one that’s more reflective.   Reflectivity, knows as the albedo or solar reflectance, is measured on a scale from zero to one.  Zero is no reflectance and one is total reflectance.  Zero is basically a black hole and one is a mirror.  Considering regular roofing materials, you have some good options.  Traditional dark asphalt shingles have an albedo of about .04 or 4%; lighter colored shingles reflect as much as 25%.  Metal roofs reflect between 60-70%, and you can now get dark colors that reflect almost as much as white.   Light colored low slope roofs, the kind you see on big commercial buildings, can reflect as much as 80%.  All roofs lose some of their reflectance over time, so start with the highest albedo you can find.

Cool roofs aren’t the be-all and end-all, but they do have their place in our homes and the environment as a whole.  Enough cool roofs will eventually lower the air temperature, allowing us to use less air conditioning, saving some energy in the process. It’s a little thing, but lots of little things can add up.

Roof Repair That Keeps The Snow Out Of Our Attic