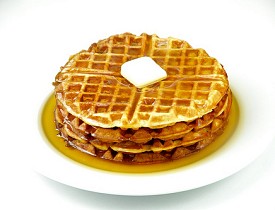 The waffle has been around in some form since the 10th century and it’s origins are in the communion wafer irons that came into use at that time. It was another five hundred years before the addition of beer yeast for leavening brought about the recognizable grid motif of the modern waffle. From the beginning, however, the popular waffle has often sported more decorative patterns than the simple grid and there have long been waffle irons to create a myriad of patterns in this delightful treat.

Flip Side Belgian Waffle Maker by Presto: The Flip Side waffle maker features a rotating design that has extra thick grids to produce the traditional thick Belgian style waffle. The waffle make flips 180 degrees to help the batter spread evenly across the interior and can be stored in a space-saving upright position. $41.86

Waffle Sticks Maker from Babycakes: The bright orange Waffle Sticks maker produces the perfect sized waffle for little hands or for dipping. Bake up a bunch for easy storage and reheating as needed for breakfast or snack time. $29.99