30 Things in Your House that Could Explode 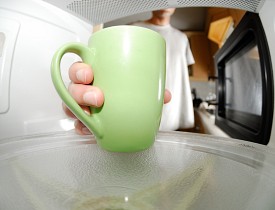 Surely there's nothing funny about an explosion in a home, but in a kid-science sort of way it's fun to think about all the everyday things around you that can blow up. Without even counting obvious hazards, like fuel cans and leaky gas pipes, any household has at least 30 things that can go BOOM under the right conditions. In fact, you might even live with someone whose temper can be described as ignitable or explosive; if so, you should certainly add this person to the list.

Note: While all of the items listed here are potentially explosive and therefore potentially hazardous, the explanations for why these things blow up are not comprehensive (not by a long shot). In other words, DO NOT use this list as a guide for how to prevent explosions.

That valve thingee with an open pipe on your water heater is called a temperature and pressure relief valve, or TPR valve. If the TPR valve and the heater's thermostat fail at the same time, your water heater has the potential to take off like a space shuttle.

If you leave your leftovers in a sealed container long enough, gasses from the decomposing food can build up and blow off the lid. Mold spores, anyone?

We all know this is true because it happened to Pa on Little House on the Prairie. You really do have to pierce a potato's skin before baking it.

Hot dog aficionados (such as myself) refer to a blown-up hot dog affectionately as a "splitter," but sausage explosions can be painful, as boiling-hot juice squirts out of the casing toward the unsuspecting griller. Maybe this should be called a "spitter."

An incandescent light bulb is like a vacuum tube and actually implodes rather than explodes when it breaks, but the difference is essentially semantic to the observer. A drop of water landing on a hot light bulb can cause it to "explode," in addition to the usual causes.

6. Beer bottle left in the freezer

There's no sadder way of ruining a perfectly good beer.

8. Aerosol cans in sunlight or heat

Anything from cooking spray to WD-40 really can explode if the can gets too hot.

9. Pumpkins (and other thick-skinned vegetables)

If left outside, your uncarved Halloween pumpkin can freeze and turn into a boo-bomb.

These are more common on power poles than houses, but a large service panel (breaker box) can have an explosion due to a short circuit overwhelming the breakers.

It's worth noting that anything, including your house, that uses natural gas can potentially become a bomb.

Explode when shaken too much, particularly when dropped during excessive shaking.

Numerous homeowners have blamed backdrafting (which provides oxygen) and unburned gasses (which newer stoves are designed to prevent) as the causes of minor explosions that can fill the room with dust and ash.

14. Non-oven-safe glass containers used in the oven or microwave

Carelessness can turn your meal of seared tuna into a summer on a seared patio.

Boring, old baking flour is highly flammable and has the potential for explosive flare-ups.

A bloated can (or jar) is bad. An exploded can is much, much worse.

The next time you're at a dinner party in Southeast Asia, you can wow the other guests with your knowledge of 9 species of local carpenter ants that can literally blow themselves up to kill their rivals.

You never see this on TV cooking shows, but many a home chef knows the sting (and sound) of water droplets hitting a pan of hot oil.

The words, "Do not remove filter unit when under pressure," are good advice. You know this if you've ever had to clean up the aftermath of a coffee bomb.

The scientific jury is still out on this one, but I personally witnessed a panful of salty water explode upward and outward about 2 feet, with very serious results. Current theory points to overly salinated softened water as the cause.

Exploding ice can actually break the glass or mug.

Seems like you can do this a hundred times with no problem, but sometimes the glass shatters, even violently.

The familiar popping of a real wood-burning fireplace is actually little explosions of trapped pitch, sap or water. Cozy, no?

An old fashioned TV tube is much harder to break than a light bulb, but it implodes just like one. A very good reason not to buy a real tool set for your two-year-old.

Many household batteries are theoretically explosive, while car battery explosions are by far the most common.

Problems with a system can lead to methane buildup. Not the best place for plumbers to take a smoke break.

Trees can explode due to fire or a lightning strike, both of which heat the water in the wood. Extreme cold can freeze the sap inside maple trees, causing it to expand.

If you haven't tried this awesome kid experiment, suffice it to say that you should never wash down 11 Mentos candies with a half-liter of Diet Coke.

Philip Schmidt is a writer for networx.com.

Roof Repair That Keeps The Snow Out Of Our Attic