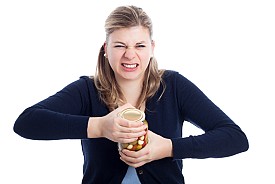 All you want is a kosher dill. You can see it, trapped within its glassy cave, taunting you with crisp, pickly goodness. And you can’t get the lid off. You’ve tried all the traditional tactics; turning, begging, pleading, cursing, and it’s still stuck fast. Will a stuck jar lid really stand between you and pickle perfection?

Nonsense! Here to the rescue are 11 ways you can open a stuck jar lid.

1. The baby bum technique. You know how television shows sometimes show a doctor turning a baby upside down and slapping her buttocks to get her to cry after she’s delivered? That’s actually not such a hot idea for babies, but it works fine on jars. Sometimes. Invert your jar, holding on to the glass part, and use your other hand to sharply slap the base. Tip it right way ‘round and see if you can get the top off now that you’ve helped break the seal.

2. Get some leverage (caution!). The best way to do this is with a small butter knife. Carefully slide the knife between the lid and the jar and twist a little bit to break the seal. Do this cautiously to avoid breaking the jar; otherwise your pickles will be ruined with glass fragments!

3. A banging good time. Another option involves gently striking the lid against a hard object at about a 45 degree angle. You can bang it against the sink or kitchen countertop, or hit it with something like a wooden spoon. This can sometimes get the lid dislodged enough to break the seal, without damaging it so it can’t be reused. Be aware that if you hit too hard, you may dent the lid and make the jar harder to open, and there’s also a possibility of breaking the glass.

4. Hot water. Try running hot water over the jar for a minute, wiping it down, and then opening the lid; you may find it helpful to grab on with a towel for some extra traction. The heat can help the metal expand a bit, making it easier to break the seal as it loses its grip on the edge of the jar. You can also use a hair dryer or lighter (carefully!), or soak the jar in warm water, to get a similar effect.

5. Give in: you need a jar opening tool. They make these! Tools designed for people with physical or neurological impairments will reduce the energy needed to open the jar, and maximize the results of the effort put into it. One of these babies can help pop the lid of a stubborn jar right off, with a minimum of fuss and spills. You might feel like a dork using it, but you won’t look like one when you open all your jars in a snap.

6. Traction, traction, baby. Sometimes your hands just don’t have the traction needed to get the job done. Try using a rough towel, a damp sponge, rubber gloves, a silicone pad (like those used for grabbing hot pans), a mousepad (remember those?), or even a thick rubber band around the edge of the lid to give you some extra purchase. Twist firmly and carefully, maintaining pressure on the lid, and it might just give way under your patient attentions.

7. Break the seal. If you don’t plan on reusing the lid, consider simply making it go away. You can use a bottle opener much like you would to open a beer to pry the lid away, or you can punch holes in the lid to break the seal so it will be easy to open. Don’t have a bottle opener? Try using a spoon, with the round body of the spoon against the neck of the jar and the edge inserted under the lid. Gently rock it, and the seal should pop. You’ll be able to get into the jar, but you’ll need a replacement lid if you want to reuse it.

8. Put on your tap shoes. Sometimes food gets stuck around the lid of a jar, especially if it’s had a rough journey or it’s been sitting around for a while (no judgments, as long as it’s not past the expiry date!). Try gently tapping on the lid to dislodge any stuck food before opening it; since it may still be stubborn, you might want to skip a struggle and go right for the traction method to get it open.

9. DIY duct tape handle. Loved by outdoorsmen and loathed by HVAC contractors, duct tape doesn’t look pretty, but it works. Tear off about a foot of duct tape (any color will do, if you feel like dressing up your makeshift jar opener), and partially wrap it around the lid, folding the duct tape down to create a tab attached to the lid, with a trailing piece of tape. Fold the trailing tape over to reinforce it (and prevent it from sticking to everything) and pull! You should be able to get enough support from the duct tape to get the lid going—as long as you’re pulling in the right direction.

10. The nutcracker. Nutcracker optional—for larger jars, you’ll want a pair of adjustable pliers. In either case, these tools lock down and don’t let go, allowing you to dedicate your attention to slowly turning a jar lid to loosen the seal and get it off. It could help to wrap the business ends of the pliers in masking tape or electrical tape for a better grip.

11. Ye olde trusty assistant. If you happen to have someone else around and you don’t want to look silly as you wrestle with a jar and an assortment of household items, ask that person for a literal hand. Remember: you’re allowed to claim that you must have gotten the lid started and they just had to finish the job, but that person is still going to want to share the pickles.

Feeling stuck when it comes to taking care of your honey-do list of home repairs? Hire a local handyman service from our vetted list of professionals in your area.