10 Giant Edible Crops You Can Grow 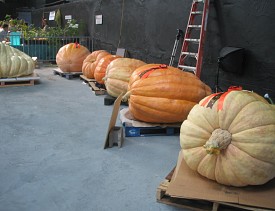 I had the great pleasure of attending the first annual National Heirloom Expo in Santa Rosa, CA. Among thousands of heirloom fruit and vegetable varieties, some of the biggest attention-grabbers were the giant pumpkins. With the smallest weighing in at a few hundred pounds, those supersized gourds were a sight to behold.

Lest you think the pumpkins grew so huge because of special fertilizer or mineral treatments, let me set the record straight. Giant vegetables, like other jumbo crops, just have giant genes. A good indicator of these crops is the word “giant” in their name (duh).

Did you know you can grow giant pumpkins and other giant vegetables at home? If you want to be the envy of everyone at your community garden this year, give these oversized crops a try.

The giant pumpkin grows naturally, on average, to 250 pounds. That's a lot of pie and maybe even enough pumpkin to build a house, as in the classic nursery rhyme Peter, Peter, Pumpkin Eater. Under the right conditions it can reach 1,800 pounds, which will fetch you a ribbon at the county fair.

With beautifully purple striped garlic described by seed companies as having a full garlic flavor, this plant has earned the name "Turkish Giant" due to the large heads which it produces.

While elephant garlic may not be a true garlic (it's actually more closely related to leeks), it still looks and tastes garlicky, although with a milder flavor. Bulbs measure a whopping 3-5 inches in diameter, and it always overshadows the other garlic on grocery store shelves.

Chard leaves are a vegetable garden standby. They are delicious freshly shredded in salads, sauteed with garlic, or baked in a tart, as the French like them. With Fordhook giant Swiss chard, which grows up to 22 inches high, you'll have plenty of nutritious greens to use as you wish.

Also known as "snake melon" or "serpent cucumber," the Armenian cucumber is actually a melon that looks and tastes like a cucumber. Nevertheless, if you want to impress your friends with two-foot-long, thick cukes, they don't have to know the difference. The Seed Savers Exchange catalog boasts that these make great pickles.

More stout and stocky than tall and lanky like most leeks, this giant grows up to 2-3 inches thick. The giant Musselburgh is an heirloom variety introduced in 1870 (according the Landreth Seed Company) and kept around not just for its girth, but also for its fine flavor.

While most collards and the closely related kale grow to around 36 inches tall, tree collards can reach well above 6 feet, the height of a small tree. Another unique characteristic is that these giants are perennials, remaining in the ground from year to year without bolting (flowering) and continuing to produce full-sized, delicious leaves. They can only be propagated by cuttings -- not seeds -- limiting their availability.

Claimed to be the largest storage type onion, the big daddy onion is a tasty yellow allium, which puts its pathetic normal sized cousins to shame. Good to use either raw or cooked.

Another true giant, the Superschmelz kohlrabi can grow 8-10 inch bulbs weighing over 25 pounds each. Territorial Seed Company notes in their catalog that this variety is known for its ability to grow huge without becoming woody; rather, it retains a “very sweet and tender” bulb.

So long that they look less like beans and more like ropes dangling from a green vine, the red noodle bean grows 18-inch long red colored pods. The rock star of the bean world, it is not even in the same realm, lengthwise, as other beans.

Whether you fancy growing giant vegetables or humbler-sized species, find a professional landscaper to make your garden dreams come true.