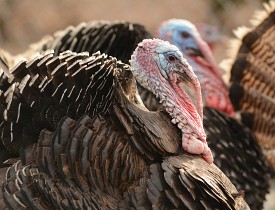 As Thanksgiving nears, it is time to pay homage to the iconic bird. Not just tasty and delicious, turkeys are multifaceted critters with fascinating histories. Enjoy these ten facts about turkeys.

1. Shock of all shocks – Benjamin Franklin did not actually recommend the wild turkey to be the symbol of America. His official suggestion in 1776 was an image of Moses and Pharaoh. He did, however, mention the turkey in a letter to his daughter, after the bald eagle was chosen to be the symbol of America. Franklin disapproved of the bald eagle due to its nature as a scavenger. He found the turkey to be a "much more respectable Bird."

3. Young turkeys are called "poults." Webster's New Twentieth Century Dictionary informs us that the word "poult" comes from the French "poulet" (chicken), which in turn is a diminutive of "poule," or hen.

5. Turkeys need to be trained to eat. The University of Arkansas Extension Service explains that turkeys grow the most when they're trained to eat several small meals a day. Otherwise, they will gorge themselves. This training is simple, though. All it takes is shaking some feed into their feed trough, or gently rousing the cute little poults. The poults will learn that activity means food.

6. Like humans, turkeys can get sick. According to the Extension Service of the Texas A&M University System, turkeys are susceptible to respiratory infections, Coccidiosis (bloody diarrhea) outbreaks, water glut, and parasites, among other health problems.

9. A brief history of the turkey: According to Penn State Agricultural Research and Cooperative Extension, "The common turkey was probably first domesticated by the Indians of pre-Columbian Mexico. The birds were first taken to Spain about 1519, and from Spain they spread throughout Europe, reaching England in 1541. When the birds became popular in England, they were called by the name turkey-cock, a name formerly used for the guinea fowl of Islamic lands. English colonists then introduced European-bred strains of the turkey to eastern North America in the 17th century. Turkeys were bred mainly for their beautifully colored plumage until about 1935, after which the breeding emphasis changed to their meat qualities."

10. And you can't forget the snood! Male turkeys have a snood. That's the name for the long, fleshy attachment to their beak. Although, according to the National Wild Turkey Federation, the snood does not have a known function, it does change form as the "tom" (male turkey) moves. When the gobbler relaxes, the snood retracts. When he struts, his snood engorges with blood and extends.